Caila Quinn is one of the 28-women who will be looking to steal 2016’s Bachelor, Ben Higgins’ heart! You may remember Ben H. got his heart broken by Kaitlyn Bristowe last season on The Bachelorette, but Ben didn’t exactly stayed sobbing over Bristowe, instead he became The new Bachelor!

Higgins is looking for “someone with a genuine heart, someone who really believes in truth and authenticity.” Will lovely Caila Quinn be the one for Ben? Let’s get to know more about her.

Quinn is Wellesley Hills, MA. resident. She is 24-years-old and recently graduated from Boston College Carroll School of Management with a B.A. in Marketing.

Caila is very active on social media. As of now, her only working account is her Instagram. She has over a thousand followers but we have a feeling that might change soon. She looks pretty genuine from her social media photos, she has a great smile and has the ‘girl next door’ look going on for her.

She is the daughter of Chris Quinn, President and CEO at Step2. She grew up with her parents and has one brother. 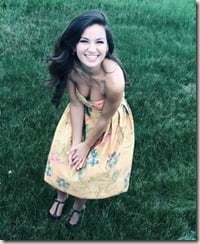 Now, we know Ben can’t base his decision on her pictures alone, but she does makes you feel warm and fuzzy inside right! She totally looks someone who’d be pleasant to be around and her credentials are not bad at all!

According to the show’s official page, Caila Quinn works as a software sales rep and is originally from Hudson, Ohio.

Following her graduation she landed a job at the Dedham, Mass.-based retail software company Reflexis. Caila is a goal oriented and accomplished lady. According to her LinkedIn profile, she had internships all throughout college working at places like New Balance, TJX, and within a corporate hospitality venue during the 2012 Summer Olympics in London.

Caila Quinn went to Western Reserve Academy in Ohio, a private preparatory day and boarding school, and she studied abroad in Germany for a bit during her college years.

But just when you thought, this girl is too nice, Caila reveals she has a half-inch tattoo on her right hip. She seems like the perfect combinations of nice and naughty.

We have been hearing some rumors about love Caila Quinn, some said Caila was eliminated on week 9, another source suggested Caila Quinn will be the next Bachelorette.