Brittany Farrar claims to be the former girlfriend of hunky athlete/Bachelorette contestant, Jordan Rodgers. Though her ex-guy has come out as one of the show’s front runners, Farrar is clearly not a fan of his TV work!

The pretty blonde took to Instagram to express her bitterness towards the youngest of the Rodgers brothers, cleverly typing “”Riding the bench doesn’t get in the way of a relationship, but cheating does.” along with the hashtags “#yourpitchisntperfect,” and “#alwayswantedtobefamous #dreamscometrue #tuneinnextweekformoreBS,” and tagging Rogers in the video of Chris Pratt shaking his head in surprise.

Now, let’s not be too tough on Brittany Farrar, she is the one broken hearted here and so could  be Bachelorette,JoJo Fletcher. We all remember how Rodgers confessed to Fletcher that he had been in loved in the past but his football career got in the way. Brittany Farrar is calling his bluff and saying it was his cheating what broke them up and not his career as he told JoJo.

Brittany Farrar is the real deal, according to her Instagram snaps, she is very close to Aaron Rodgers’s girlfriend, actress Olivia Munn. The gals even work out together so the link is obviously there and thought is not exactly clear when Farrar and Jordan were a couple, she still keeps close ties, at least to his brother Aaron and his girlfriend. Want to know more about Farrar? Below we tell you everything we know about her. 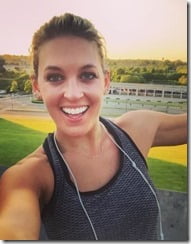 Brittany is a hot trainer originally from Chico, California, though she is currently based in Tennessee. According to her Facebook page, she works at SHED Fitness Belle Meade and  currently resides in Nashville.

According to her LinkedIn, before Farrar became a badass trainer chick, she worked as an executive assistant at BBR Music Group. Brittany Farrar attended Chico State from 2008 until 2012 and holds a business management degree. She also attended the University of Hawaii at Manoa from 2010 until 2011.

Do you think Brittany Farrar is desperate for some TV attention, or did she do a favor to Jojo by exposing Jordan’s cheating self?