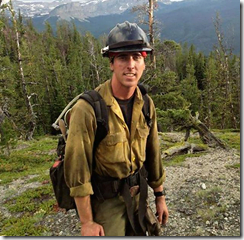 As we speak over 400 brave firefighters continue to battle the blaze in Arizona, unfortunately it has quadrupled in size; on Sunday, a sudden wind storm turned the forest fire into an out-of-control inferno that trapped and killed 19 members of an elite crew of firefighters trained to battle the nation’s fiercest wildfires.

Disaster struck on Sunday when the fire killed 19 members of a 20-person hotshot crew based in nearby Prescott, Arizona; the team had spent recent weeks fighting fires in New Mexico and Prescott before being called to Yarnell, entering the smoky wilderness over the weekend with backpacks, chainsaws and other heavy gear used to remove brush and trees. One member of the team survived as flames roared over the men because he was moving the crew’s truck! That is 21-year-old Brendan James Mcdonough who is remaining in seclusion on Wednesday attended a candle light vigil in remembrance for the 19 victims of the Yarnell Hill Fire at Prescott High School in Arizona, Tuesday night.

Brendan has been getting lots of support from loved ones and friends and even strangers reaching out to him. He wrote on Facebook

“Thank you all for the love and support,”

A California native, Brendan’s hometown is Oceanside, C.A; he attended Prescott High School in 2005 graduating in 2009, that same year he started Firefighting school at Yavapai College. But it wasn’t until 2011 he started working as a wildland firefighter at Granite Mountain Hotshots; saying about his experience working as a firefighter for the past two years:

Officials said Brendan was the only member of the Granite Mountain Hotshot crew to survive Sunday’s deadly firestorm; it would appear he was serving as a lookout when he warned 19 of his friends/brothers to get out just before they were engulfed and died. Brendan’s father Scott Mcdonough posted an emotional picture of his son wishing him to be safe out there. So far we don’t know on his status, no girlfriends or wife have been identified.

The fire has scorched about 13 square miles of the mountains outside Prescott, 80 miles northwest of Phoenix and it was reported on late Tuesday, the blaze was 8% contained.

Our hearts and prayers go out to the 19 families of the fallen firefighters and we are glad Brendan is safe.