Blake Moynes is one among the men casted in season 16 of The Bachelorette, originally starring Clare Crawley who has now been replaced by Tayshia Adams.

Blake Moynes is one of two Blakes in this season, the other fellow contestant is Blake Monar.

Unlike Monar, Blake Moynes is not from around, the wildlife manager is originally from Canada, where he currently lives. He has one sister, Taylor and one brother, Cody Moynes. Their mom is, Emily Moynes.

Moynes has definitely grabbed audiences attention and is not only because of his smile, but also because who wouldn’t fall for a guy who rescues animals, right?

Moynes scored major point with Bachelorette Clare -after he was the only contestant who reached out to her during quarantine, before filming began. Blake made the bold move, which is a big no-no with production, after he saw Clare’s IG stories and how she was struggling not being able to see her mom. However, Clare is a thing of the past and is yet to be seen if Moynes will make the same impression on Tayshia Adams. 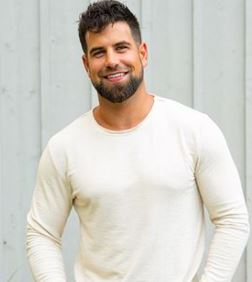 On his ABC bio, Blake Moynes claims he is living his dream working outdoors. At university he studied a number of wildlife management programs. In addition to his job as a wildlife manager, he volunteers with a different endangered species every year. He calls himself on social media ‘a wildlife enthusiast.’
In addition he shares a piece of advice, writing on his IG bio

It’s pretty safe to say his dream woman, needs to be the outdoorsy type. Since Blake enjoys being outside, is not a big shocker the 29-year-old loves picnics, however what may come as a shock is that despite his rough beard/bad boy appearance, is that he actually loves the Ninja Turtles.

He also has a romantic side, in fact he’s always wanted a love story like ‘The Notebook’ (and you though only girls wanted this). He shared a photo of the season premiere saying ‘I have always wanted my love story to be similar to the notebook … but do I get my wish?” “Make sure you have your popcorn and stiff drinks for this one.”