Ben Hanisch, he is the handsome boyfriend of funny girl, Amy Schumer. Media is going absolutely crazy over Amy’s lucky stars. She totally snatched a hot one!

Sources told People, “Amy is so, so happy,” “She calls him her boyfriend and says he constantly tells her how pretty, **** and perfect she is. She feels like she hit the jackpot.”

Ben Hanisch and his lady, have already been out in public. They visited the White House, to hear President Obama’s speech on gun violence. On Jan first, Ben got really candid and posted a photo on Instagram captioning it

Sometimes in life you get extremely lucky, and the smartest, funniest, most beautiful woman comes along when you least expect it. Here’s to what adventures 2016 brings! 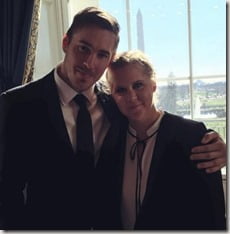 29-year-old Ben Hanisch is a furniture designer. He attended The University of Utah and things about him just keep getting better. Ben Hanisch is definitely a man of many talents. As a teen, he was a snowboarding star. He was already competing in tournaments and had several sponsorships by the time he was 17. He left snowboarding to attend college.

He holds a degree in Business, Management, Marketing, and Related Support Services.

According to the NY Daily News, he took a temporary job renovating an old warehouse that sparked his interest in a design career.

The good looking fella now, owns his own business –which is environment friendly. Ben, a Chicago native, founded his own custom-furniture company The Last Workshop. According to his LinkedIn, he also previously served as a design consultant for HGTV.

When Ben Hanisch is not busy creating furniture, the hunk spends his time taking awesome snaps. Ben is also an avid photographer and his Instagram shows he has a great eye to spot beautiful things.

The 34-year-old blonde hasn’t officially confirmed the news of the romance and instead tweeted a photo of Obama writing: “Well the word is out. It’s official. Here’s my new boyfriend. #StopGunViolence”

Ben’s looks have sparked major interest in the new couple, some sites describe him as the real-life Aidan from “*** in the City.”

Sources say, Ben and Amy’s romance is still fresh but with his looks and her sense of humor, this could be a recipe for success! What do you think?