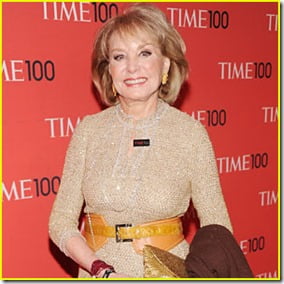 We couldn’t agree more with Ben Sherwood, president of ABC news as he said:

“There is only one Barbara Walters,” “We look forward to making her final year on television as remarkable, path-breaking and news-making as Barbara herself”

Yup, Barbara Walters, the first woman to co-anchor a U.S. evening news program, who created and hosted The View, anchored 20/20 for more than 20 years and many more achievements is saying goodbye. On Monday’s edition of The View, she will announce that she’s retiring from broadcasting in summer 2014.

Walter’s career sure is the envy of women in T.V but in this occasion we want to talk about her more personal life journey, her love life and her only daughter Jacqueline.

The glamour Walters has married and divorced three times. Her ex husbands are Robert Katz, Lee Guber and Merv Adelson. She’s also dated a lot of glamorous and interesting men, the list of which includes a former chairman of the Federal Reserve Bank-Alan Greenspan in the 70’s, and a United States Senator-John Warner in the 90’s. She is currently single but has her paramours with whom she takes **** cruises on the Aegean!

But let’s go in order; first there was Robert Henry Katz, a business executive and former Navy lieutenant. They married on June 20, 1955, at The Plaza Hotel in New York City. The marriage was reportedly annulled in 1958. In second place, we have Mr. Lee Guber, theatrical producer and theater owner. They married on December 8, 1963, and divorced in 1976. The couple adopted a baby girl, Walter’s only daughter Jacqueline Dena Guber. The Boston native then proceed to married, divorce, re marry and re divorce! Merv Adelson, the CEO of Lorimar Television. They married in 1981 and divorced in 1984 and were married again on May 10, 1986, and divorced in 1992. She was also romantically linked to a gay lawyer Roy Cohn in college, and the lawyer said that he proposed marriage to Walters the night before her wedding to Lee Guber, but Walters denied this.Explaining her lifelong devotion to Cohn as gratitude for his help in her adoption of her daughter, Jacqueline. Now,44 year-old Jacqueline Dena Guber was born on June 14,  1968, she was adopted the same year after the famous journalist had three miscarriages with hubby at the time Mr. Guber. Barbara named her daughter after her sister Jacqueline who was born mentally disabled and died of ovarian cancer in 1985. Jackie Danforth as she is now known, was actually a troubled teenage who in her own words

“I was a runaway,”  “I loved to run. I thought running would solve all my problems.” For an entire month Barbara didn’t know where she was or what to do about it! But that was a long time ago now, Jackie  has a self-discovery program for troubled girls. It combines outdoor living & clinical therapy. She attended the Marine biology program at the University of Maine and over the years has achieved several positions as the founder of the program New Horizons: director of operations, founder and executive director, executive director.

No doubt the life of 83 year old Barbara has had her ups and downs but not the Famous T.V personality can enjoy “the view” from a different side of the camera.