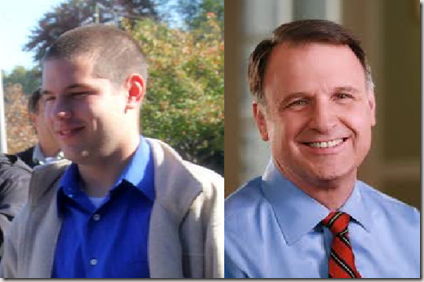 What a horrible tragedy for the family of Virginia state senator Creigh Deeds, also a former Democratic nominee for attorney general in 2005 and for governor in 2009; it was first reported to be in critical condition this morning after being attacked apparently by his own son! Austin Deeds, one of his four children to former wife Pam Deeds.

Gus Deeds, whose birth name is Austin Creigh Deeds, was born May 06, 1989 and was charged with underage drinking in 2009 while a junior at the College of William and Mary. Other than that completely normal infraction, he does not appear to have any criminal history. He was close with his father, and took a semester off from school to join his dad on the campaign trail during the fall of 2009. Gus served as the vice-chairman of “Sportsmen for Deeds.

Not many details have been released and so far no explanation on how the course of events happened, but the facts so far indicate the 24-year-old reportedly shot himself. He died from an apparent self-inflicted gunshot wound, sources told WRC-TV.

It’s still an enigma what led to the violence between father and son but a possible hypothesis could be Gus was having mental problems, according to the New York Daily News, Gus Deeds had been evaluated under an emergency custody order for mental health issues, Dennis Cropper, executive director of the Rockbridge County Community Services Board, told the Richmond Times-Dispatch.

However, Deeds could not be kept in custody because officials could not find an open psychiatric bed to keep him. He was found suffering from a life-threatening gunshot wound at the residence in Bath County. Though troopers and first responders attempted to save him, Gus Deeds died at the scene. Gus had three sister, Amanda, Rebecca, Susannah. He was also known to enjoy bluegrass music, and played the banjo. Creigh Deeds divorced Gus’s mother in 2010 and remarried last June.

In recent updates, the nymag.com reports

The Virginia State Police just held a press conference. They don’t have many new details, but say Deeds was stabbed multiple times in the head and torso and “has been able to talk” to investigators.

On his Facebook page says he speaks English, Arabic and Spanish and on the Religious Views sections says “None Salvation is through faith in Christ, not organized religion” and on political views, “Too busy with love to care.” Interesting?