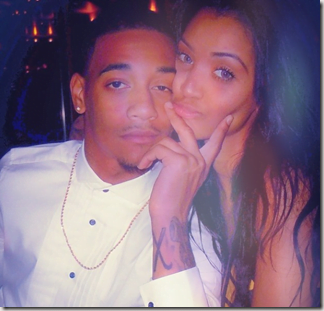 We’ve all heard about the explosive text messages Selena Gomez sent to her ex- Justin Bieber, where she exposes how Justin hooked up with this so called Kristina girl. Now, not only did Justin apparently cheated with her but also his pal Lil Za hooked up with Kristina’s girlfriend, a girl named Lynn!! Now we all know how Justin and Selena ended up but how about Lil Za and his girl!!!

What do you think Atifa Barwani thinks of all the recent events involving her boyfriend, 20-year-old Xavier Smith a.k.a Lil Za???

The Dubai native, who is absolutely stunning by the way, has her social media plagued with pictures of her and Lil Za, she seems completely devoted to the guy. All the images avobe were pictures taken in the last few days, and the captions on her part go from

“I love you baby,” “I love this picture of us” to “To the person who puts a Smile on my face everyday@lilza #lovemyman”

Atifa has a sister named Tammy Al-Barwani, and according to her Facebook page, the sister are from Dubai but moved to Mesquite, Texas in 1996. Attended Poteet High school in Mesquite and Richland College in Dallas, Texas. That is Tammy on the left and Atifa on the right. Doesn’t her sister looks like a younger version of Kim Kardashian and Atifa like an younger version of Rihanna?? The point is the Arabian gals are gorgeous. The third picture above, is Atifa with one of her best friends, Yaima Quintana.

Atifa was born December 20, 1989. That would make her 24-years-old meaning she is four years older than her boyfriend Lil Za.

Dubai, Dallas Tx! MIDDLE EASTERN- A Woman is like a Precious Pearl, only to be touched or revealed to only One.

Everything that God made valuable in the world is covered and hard to get to.

She also has a VK account, where we can see different posts of Selena Gomez and Justin B. Sources on RadarOnline, say Bieber’s pal “Lil Za hooked up Kristina’s friend Lynn while Justin got it on with Kristina,” And days later of the egg throwing incident, Atifa’s man ended up in jail for felony drug possession after they allegedly found Ecstasy and Xanax, but lab tests have not yet confirmed that.

We wish the best for this beautiful girl and hope her taste in man improves soon! Oh well, when you are in love, you do some crazy things!