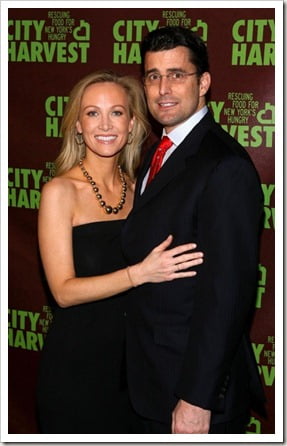 Local TV celebrity nabbed at Darien home after his mother-in-law calls cops. Morrison faces second-degree strangulation charges as his wife was spotted Monday in black turtleneck that hides her neck.

WCBS anchor Rob Morrison was arrested in Darien, Conn., for supposedly suffocating his wife during an argument. Cops said in a statement :

“Upon arrival, it was ascertained that Morrison had been becoming increasingly belligerent toward his wife during the course of the evening, culminating in his choking her by the neck with both hands.”

Rob Morrison was bleeding from his face, a wound as a result of the fight with his wife.

A day after the alleged attack, the couple issued a joint statement through Rob Morrison’s lawyer that downplayed the dustup — even though the husband was charged with a crime.

“The Morrisons are confident that a full review of this matter will show that the allegations have been greatly exaggerated,”

“While this matter is being addressed, Rob and Ashley hope that their family’s privacy will be respected.”

Police said the hot-headed anchor grew upset with his wife beginning Saturday night. Cops wouldn’t say what they were fighting about, but the quarrel with him “choking her by the neck with both hands.” Darien police said while being processed, he “made verbal threats to do his wife additional harm, which were overheard by arresting officers,” Pressed for an explanation Monday night, the hubby had little to say. Ashley Morrison didn’t ask for medical attention, though police said there was confirmation of an assault.

Cops confirmed in a statement:

“Officers did observe red marks on the victim’s neck consistent with this allegation,”

Rob was arrested again on Monday after calling his wife more than 100 times over several days last month, authorities said. Morrison, 46, of Stamford, Conn., was charged with criminal violation of a protective order and second-degree harassment after turning himself in on a warrant about 6 p.m. Subsequent to starting her career in finance as a licensed Estate Tax Planner,  40-year-old Ashley turned her attention and faculties to broadcast journalism.  Working her way across the country she landed in New York, first at WPIX , then as an Anchor and Stocks Editor at Bloomberg TV and now as a Business and Financial News anchor for CBS Moneywatch. She has also kept her fervor for tennis.  A former NCAA All-ACC Full Scholarship tennis player at North Carolina State University, her time on the court these days is mainly spent teaching the next generation of scholar athletes. Ashley also plays a news reporter in Steven Soderbergh’s upcoming movie “The Bitter Pill” with Jude Law, to be released in early 2013. Ashley Morrison born Ashley Risk on July 26, 1972 to Fred and Martha Risk, she graduated in 1990 she graduated from Columbus East High School. Ashley studied Broadcast Journalism at the North Carolina State University, where she became a fantastic tennis player. with whom she has one son Jack, they live in Darien, Connecticut.