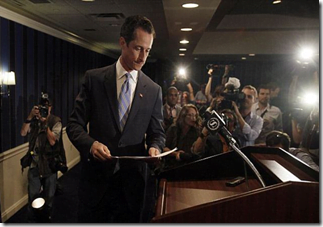 Looks like 48-year-old Weiner did not learn the lesson and he will have to pay with his campaign going pretty much down the toilet! Let’s freshen up our memories; the former rep resigned from his seat in the U.S. House of Representatives after his extramarital sexting scandal came to light back in June 2011.

Now the New York City mayoral candidate Anthony Weiner has done it again; only this time he not really trying to cover up. In recent report Weiner has said he in fact exchanged lewd messages with a woman after his departure from Congress.

Thanks to TheDirty.com it was unveiled a series of messages that allegedly explain the relationship between Weiner and an unidentified woman. The explicit messages were disclosed by the woman in question saying how Weiner came to contact her via his “Carlos Danger” yahoo email! She first reveals Weiner found her on Formspring on July 2012 and by August things were hot and heavy between the two internet lovers!

Now the girl who prefers to stay in anonymity wrote the following:

I just want to clarify that although I was 22 and technically an adult, I was obviously immature and I acted irresponsibly. I realize my correspondence with Mr. Anthony Weiner was a huge mistake and I am embarrassed by it. But the facts are the facts, and he’s running for mayor of NYC so I felt I should get my story out there.

I have no reason to lie. I don’t want the attention or I wouldn’t have kept my anonymity. I didn’t get paid for anything. I quite literally have nothing to gain from this.

Some people have doubts about the Facebook page he used to talk to me in the beginning, before switching to facebook/formspring/phone calls — It’s his personal account. It’s linked to his wife’s account. It’s deactivated at the moment because of the campaign. Aside from the fact that I know many people in the political realm who have verified that it’s his account, I also know from our phone calls.

And to be totally clear, I did not sleep with him or receive any funds from him. I’ve seen comments stating otherwise and they are all totally false. I think it’s important to reiterate the fact that all of this happened with him after his first scandal, so all of his campaign promises about being a changed man are absolute lies.

Should we believe her or devious intentions are in place?? If she recognizes her mistake why come clean and ruin whatever credibility Weiner has left?? Could it be a sick campaign twist?? Wonder if wife, Huma Abedin will stick this one down? Maybe we should look in Formspring to find out. To try and cover up his little dignity left he stated to the media:

“I said that other texts and photos were likely to come out, and today they have,”  “These things that I did were wrong and hurtful to my wife and caused us to go through challenges in our marriage that extended past my resignation from Congress.”

In the meantime you can get to know your Candidate up close by his naked pictures below. Or, you can find him on Facebook here.