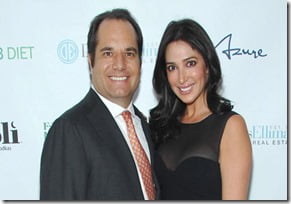 Major cheater alert! The couple in the picture are the Silverman’s, but they are soon to be ex-husband and wife! Andrew Silverman is married to 36-year-old Lauren Silverman. The couple who have a seven-year-old son together have been married for a while but apparently have also been unhappy for some time! I don’t think that’s reason enough to cheat but that’s just me.

The cheater here is Lauren who is now pregnant with none other than one of the couple’s closest friends! The other man in question happens to be music mogul Simon Cowell. That’s right the nasty A.I judge who everyone loved to hate.

But what do we know about Mr. Silverman? Andrew began his career on the trading floor of Credit Lyonnais while completing his B.A. in Economics from the University of Pennsylvania.

Silverman is the current chief investment officer at The Andalex Group. He is responsible for The Andalex Group’s strategic financial structuring involving foreign and domestic financial partners, lenders and institutions. In his role, he oversees numerous transactions, leading financial analysis and due diligence efforts while working with lenders to secure acquisition and construction loan financing. In addition, he manages all aspects of leasing for properties within The Andalex Group’s portfolio. Andrew also holds responsibility for the disposition of a property when it has reached its peak in the investment cycle.

Silverman is the son of Allen Silverman. Andrew along with his brother Alexander and father, run the family’s legacy business that began in the 1980’s. In the company page says

We innovate in every kind of market condition, with the kind of broad-based diversification that integrates large-scale real estate management expertise, construction and capital improvement, strategic leasing and proprietary investment and development.

The successful business has completed over 15 million square feet of acquisitions and dispositions since its inception. I guess the life of the wealthy socialites wasn’t enough for Lauren? I mean to be hanging around with Cowell you need to be somebody so this couple had everything going for them, apparently that is.

Andrew believes Lauren started cheating on him with Simon during one of the many vacations they all shared together. Can you imagine, stabbed in the back by one of your own! All three of them vacationed together just last year and as Andrew and wife Lauren’s marriage deteriorated she allegedly grew closer to Cowell. According to sources, Lauren is so sure of her love for Simon and the future of their child that she is apparently desperate to married Simon! Talking about crazy! Simon’s baby mamma is 10 weeks pregnant.