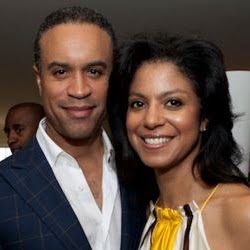 Andrea Dubois is the lovely wife of popular and well-liked TV news anchor and reporter, Maurice Dubois. Her award winning anchorman husband has been diagnosed with Bell’s Palsy.

The 50-year-old CBS anchor announced in a Facebook statement he would be taking a leave from his anchoring job to follow treatment. He wrote: “Bell’s Palsy, a temporary condition which has caused weakness on the right side of my face. My doctors say the prognosis is good once it runs its course.”

He also thanked for the well-whishes and support he’s been getting.

Maurice began his career as a desk assistant in the late 80’s. He’s worked for King-TV, KCRA-TV, WFLD-TV, NBC New York and CBS New York where he’s worked since 2004.

DuBois has been co-anchoring the “CBS 2 News at 5” and the CBS 2 News at 11” since 2011. He also is an occasional substitute anchor on the weekend edition of the “CBS Evening News.

In 2002 he received an Honorary Degree, Doctor of Humane Letters from Medgar Evers College, of The City University of New York. He’s also won four Emmys according to Wikipedia. Andrea Dubois was born Andrea Adair. According to her Facebook page, lovely Andrea Dubois is originally from Atlanta, Georgia. She attended Woodward Academy in College Park, Georgia. She is a graduate from NYU Stern where she studied her MBA in Marketing. She also studied French at Wellesley College. According to her LinkedIn she is an Independent Marketing and Advertising Professional.

Andrea Dubois has been married to Maurice since 2001. The couple held a private and small ceremony after dating for one year. The couple traveled to Southern France for their honeymoon.

As an interesting anecdote, the couple was returning from their honeymoon during the 9/11 attack. He said of his wife at the time: My wife became my producer, and she knows nothing about the business—she’s in marketing,”  “So we went out and scraped together a few people stories of how Europeans were reacting.”

Andrea Dubois is the mother of the couple’s only child, son: Brandon James Dubois, who was born in 2008.

The family currently resides in Manhattan.

We wish Andrea Dubois’s husband a speedy and full recovery.