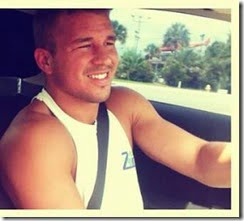 Who would have known! Nathan Griffin and teen mom 2 girlfriend Jenelle have more in common than we thought! The 25-year-old part time male underwear model is also a dad! Nathan has a baby girl around 3-years-old with whom he spent some time recently! Griffin and ex girlfriend Allison Stevens are the parents of the cute little girl but neither have full custody.

Allison was arrested in 2011 for possession of cocaine and possession of drug paraphernalia. There is not much information about her or her relationship with Griffin or why they broke up; Is she a teen mom as well? Was she a high school sweet heart?? What we can assure is that she gave birth to Griffin’s daughter and named her Emery.

Steven’s parents have full custody of little Emery so Allison and Nathan just get visitation rights. If Allison’s parents do not approve of the company the parent is keeping then the visits must be supervised, according to sources.

That’s another coincidence between Nathan and Jenelle, neither of them have custody of their own children. However Evans’ new man has been accused of being a super positive influence! Jenelle’s had a pretty rough year thanks to a few ****** and simple assault charges, but she’s currently clean and sober.

Jenelle’s already made more than a few positive changes thanks to Nathan and his **** self. Not only does she attend Narcotics Anonymous meetings on the regular, she gave up smoking pot, works-out on the regular in order to stay healthy, and is the proud owner of a new home!

In fact, Jace is finally allowed to spend the night at Jenelle’s, which is an indication as to how much progress she’s made! Maybe instead of just an afternoon with their kids they can all live together and be a big happy family one day.