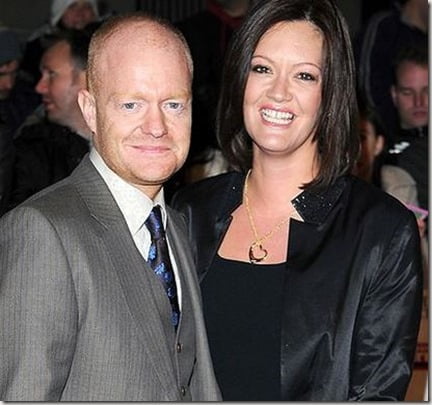 Meet Alison Wood, the wife of Eastenders star Jake Wood. Luckily for lovely Alison her hubby has very little in common with his character in everyday life.

Alison’s hubby is about to show one side of him, we didn’t see coming! The 42-year-old actor was confirmed as one of the celebrities taking part in this year’s Strictly Come Dancing! The soap star has contrasted the image of his on-screen character and hopes viewers will warm to seeing the real him.
Definitely the person who knows him best, his pretty wife of many years, Alison or missus Wood. Born Alison Murray, she is now better known as Alison Wood. She and her man have been married for 13-years and have known each other for at least two decades.

45-year-old Alison and her hubby live in a converted schoolhouse in Hertfordshire, with her man and two children, Amber and Buster. She first gave birth to daughter Amber in 2005, three years later they welcomed son Buster in 2008. Did you know while Alison was pregnant with the couples son, she worked with a trained and did a lit of boxing and walking! About becoming a dad for the second time, her hubby said “It’s great. Obviously we’ve been used to babies with Amber, so it’s been lovely second time around and it’s nice for Amber to have a baby brother. We’ve automatically adapted to being parents. Now having a boy and a girl we’ve got a full team and it’s definitely brought Alison and I closer together.”

Her man who has played love rat Max Branning for seven years but he has popped in a variety of different shows over the years. He’s made appearances in Only Fools and Horses, One Foot in the Grave, Red Dwarf and Minder.

Outside of work, Alison’s man loves spending time with his family. He also enjoys rock-climbing, running, cycling and boxing in his spare time. Jake is a big football fan and avid supporter of his team, Arsenal.

The mom of two and wife, defends her hubby when he says, he is nothing like his Eastenders character, saying “My idea of fun is a nice meal with my wife Alison, or spending time with my kids..”

Alison will surely be rooting for her man, find her on Twitter here.