Moving on, miss Waters is only 23 which makes her one of the youngest contestants. She comes to us, or better said to Nick Viall, all the way from Secaucus, New Jersey.

According to her ABC bio, she lists Good Will Hunting, Titanic, and Tristan and Isolde as her favorite movies. 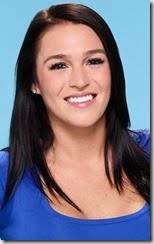 Though Alexis might look like she can’t break a plate, she has a wild side of her own. When asked if she has any ink work, she revealed she has not one but two tattoos; saying she has the Aries symbol on her wrist and “smile with the rising sun” on her left hip.

Aside from dolphins, she also is a dog lover. Alexis Waters says she is caring, romantic and honest lover, who can’t live without her family, her dog, her best friend, her fake eyelashes and last but not least her whitening strips.

The most outrageous thing this gal has done is move to Miami by herself while the most embarrassing being the time her ex-boyfriend told her she had a mustache at a Giants game.

The brunette beauty has been a bit criticized for listing her occupation as ‘aspiring dolphin trainer’ because, well, our dear Alexis let us break it to you but, that isn’t a real a job.

She isn’t a lost case however. Alexis Waters attended Secaucus High School and later went on to Montclair State University –where she played volleyball for the women’s team.

Accoridng to her MSU profile, she appeared in nine matches (26 sets) before suffering a season-ending injury in 2012. She appeared in 18 matches during the 2013 season.

How far do you think she will go?