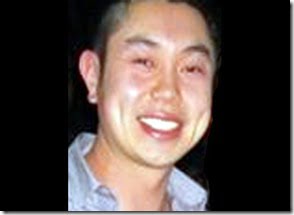 Meet a man from Lower Manhattan named Alexian Lien. Unfortunately Lien has made the headlines on a savage attack he was victim of, the 33-year-old driver was traveling along his wife and their 2-year-old daughter through one of the lanes of the northbound Henry Hudson Parkway on Sunday, when his Range Rover was caught between a swarm of high-powered bikes.

So far nothing strange, but the bikers who were headed to Times Square had all but commandeered the three lanes of the northbound Henry Hudson Parkway, they baited him by brake-checking until there was a minor collision, then all **** broke loose!

Part of the attack was caught on tape, but it doesn’t show the severe beating the driver, Lien; suffered!

Lien of Lower Manhattan, was treated for facial lacerations and bruising at NewYork-Presbyterian Hospital and released. Since then, he has deleted his Facebook and twitter accounts and seems not willing to give any interviews on what happened.

Lien who is married to Rosalyn Ng and have a small baby together didn’t have much choice other than to hit the gas to protect his wife and child, which further enraged the bikers, who eventually caught up to him and broke out his window.

Lien was born in 1980 he is a former Director of Skrill Holdings Limited, his newest directorship was with Mb Employee Nominees Limited where he held the position of “Banker“. The company was established 26 Oct 2007.

Previously, he was an Analyst in the Distressed Finance and Restructuring Group of Credit Suisse First Boston in New York. Mr. Lien served on the Board of Trema Group. He holds a B.S. degree in Computer Engineering from Columbia University.

Alexian Lien did suffered injuries but in the process he also left one of the bikers paralyzed from the waist down after he ran him over while trying to escape.

Is he really the victim? What do you think??