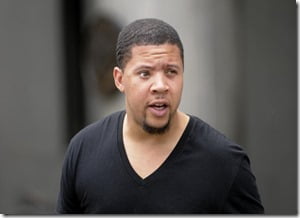 Looks like surely but slowly the true colors of former Pat’s tight end Aaron Hernandez are flowing out for everyone to see! Now he has another victim; Alexander Bradley who’s been described as a friend, associate and even former personal assistant to the former NFL player.

Bradley was born in 1982, he currently lives in East Hartford, Connecticut. They might have been friend before but the animosity started when the pair were allegedly partying at a strip club called Tootsie’s in Miami, Florida; the two of them got into an argument and long story short Hernandez and Bradley were in a car when a gun was shot by the player that resulted in the facial damage and loosing of Bradley’s right eye. Who takes a gun on themselves to a strip club?? Only thugs! It is not cleared if it was an accident or intentional yet.

Hernandez’ is currently facing murder charges on the Odin Lloyd’ case but to top it all off he was served in jail by Bradley! Bradley is suing Hernandez for $100,000 for the pain and suffering of his injuries and could provide important and incriminating evidence in the Odin Lloyd murder case since he must now a wide variety of intimate details on Hernandez, not to mention the grudge for popping his eye out!!!

Not much more personal details can be found about Alexander other than his criminal records! Apparently he is no stranger to the can; According to documents he was charged in 2006 with the distribution of cocaine and served 18 months in prison. He has also been charged with drunk driving, assault, burglary, and criminal mischief, driving with a suspended license, and disorderly conduct. Bradley also has three separate motor-vehicle convictions from 2009-12 in Bristol and Rockville.

Figures! One of a kind get together. The incident that cause Bradley to loose his eye took place on February 13, he then filed his lawsuit in Florida, site of the alleged shooting; with the help of his Attorneys Jaroslawicz & Jaros and Waks & Barnett.  Bradley claimed he needs to return to Florida to receive further treatment for his injuries.

Although his injuries are not a laughing matter Bradley’s action’s sure are questionable; a the beginning he told cops he didn’t know who shot him so maybe that’s why Hernandez’ wasn’t arrested in the first place??