The stunner is currently looking for love on the current season of the Bachelor featuring pilot, Pete Weber -and according to reports she will quickly be giving a lot to talk about. So of course we want to know everything about her and surely you do too!

24-year-old Alayah Nicole Benavidez is a beauty pageant veteran, in her fourth time competing, she was named Miss Texas and got to represent her home state at the Miss USA pageant in 2019. Alayah was also named Miss United States in 2016.
Alayah attended Northwest Vista College, and eventually transferred to the University of Texas San Antonio, where she majored in English. She has expressed her desire to further her education and get her M.A.and Ph.D after finishing college in 2020. According to her pageant profile, she hopes to teach at the collegiate level one day and to become a published author. The stunner who was diagnosed with dyslexia in her teens -enjoys writing poetry. 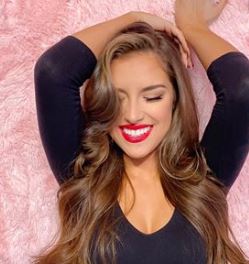 The University student, helps finance her education by working as an Orthodontic Assistant. In addition to her day job and modeling, Alayah Benavidez is also active in the community -which is pretty much a must on the resume of beauty queens. For Benavidez being active in the community means serving as Team Captain for the Muscular Dystrophy Association’s Walk of Hope, and serving as a camp counselor at MDA. She has also worked with God’s Love We Deliver, Habitat for Humanity, the USO, and the Down Syndrome Association of South Texas.

Benavidez also calls herself on social media a business owner. The brunette, along with her mother Cynthia, and sister Isabella -is the owner of THREE BEES BOUTIQUE -which offers a wide range from clothing to handbags, accessories and even home decor. Which is even better; is its website claims every purchase helps fund literacy initiatives.