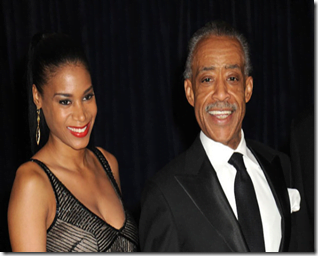 35-year-old Aisha McShaw, is a Westchester “personal stylist” who has been seen at several recent black-tie affairs, including the White House Correspondents Dinner in April and President Obama’s holiday party in December. But you wonder how is it that this regular looking mortal could attend such high profile events??

Well the young fine looking sister happens to be the lady friend of 58-year-old Anchor Al Sharpton! And by lady friend I mean his girlfriend of several months now. The civil rights activist and MSNBC star has been spotted on Sharpton’s arm enough time to assumed they are in a romantic relationship.

Aisha who is registered to vote as independent in Mamaroneck, says on her LinkedIn page that she works in financial services as a personal banker at Wells Fargo. Al not minding her not famous status has been showing her around is several bashes and she looks pretty good, after all she is 23 years his junior.

Althoug it was obvious she was not his daughter Aisha herself confirmed to the media the status between them on Monday’s New York County Democratic Committee Award Ceremony saying:

She told The News that she works as a “personal stylist,” but Sharpton quickly shuffled her off without letting her elaborate on her profession; whoops! Could it be it just slipped out of her?? The Rev. Al seems to have found new love but might not be ready to tell the world?

The minister did not comment on his personal life but we can say they sure look happy in their pictures, then why hide it right?? The democrat might have not officially confirmed it but he is free to date and this might actually be his most serious relationship after his 24 year marriage with Kathy Jordan ended in divorce in 2004.

In the meantime maybe we can wait for a tweet from him on his current status?