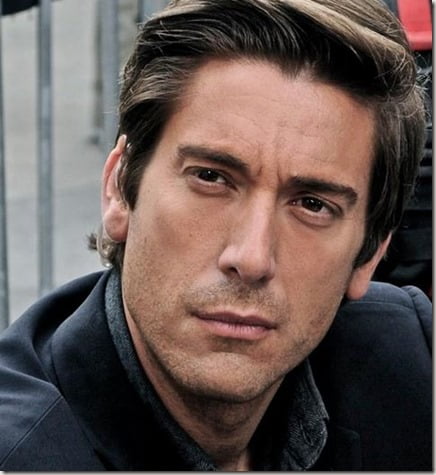 Have you heard iconic female TV journalist Diane Sawyer is stepping down from ABC’s World News? Well she is and we have the guy who will be replacing her!

Meet David Muir! Ok, so Muir is not exactly a new figure in the news business, the 40-year-old journalist anchors the program’s weekend edition.

This is an incredibly humbling day. Honored to join @DianeSawyer and @GStephanopoulos in this great new adventure.

A magna *** laude graduate of Ithaca College, Muir attended the Institute on Political Journalism at Georgetown University and studied at the University of Salamanca in Spain.

So all that effort paid off since the good looking man is an Emmy Award-winning anchor based in New York. He is not only the weekend anchor for the flagship ABC News broadcast “World News” but also the co-anchor of the ABC newsmagazine “20/20.” He has over 100K followers on Twitter but he doesn’t seem so popular in Instagram with just over 5 thousand peeps after him.

Muir –who is fluent in Spanish –has never been tied down, and doesn’t have recent records of dating, the news hottie is super passionate about his work but we wonder, he is already on top of his career isn’t time to you know, settle down? Prior to joining ABC News, he spent a month in the Middle East reporting on the war in Iraq, helping to earn the station the prestigious National Headliner Award. He certainly has done the ***** work, Muir gained rare access to the streets of Tehran leading up to the nuclear talks and he was the first American journalist to report from Mogadishu, Somalia on the worst famine of a generation, coming under fire while reporting from the war-torn city. He earned an Edward R. Murrow Award for his reports.

Muir joined ABC News in August 2003 and quickly moved on to become one of the network’s lead correspondents on domestic and international news. He has reported from across the globe, including Egypt, China, the Middle East, South America, Eastern Europe, South Africa and throughout the United States. But you can read all the boring stuff on his ABC news bio here; lets get to the good stuff.

Has it ever happened to you or someone you know? Usually when somebody is on the rise, the craziest things are made-up about them, and sometimes it might actually be true! Well it turns out we came across some very interesting piece of info about David’s private life, the forum makes it clear he destroyed a marriage and even implies he intimately engaged with another man!

Someone told me today this guy ruined the marriage of a local anchorwoman in Syracuse named Carrie Lazarus when he was an intern at the station sometime in the 90’s. He was caught f*ck her, her marriage was wrecked and she was dropped from the station after many years.

The thread also says Muis met with Peter Jennings for trysts at the Empire Hotel in NYC where Muir was being “groomed” for Jennings’ job in the future.

We can’t assure anything but what do you think?

We heard Muir d could be dating this handsome guy.