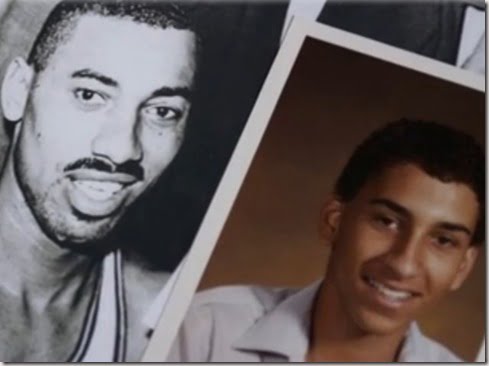 We hear people coming up with extraordinary stories about claiming to be someone famous’ child all the time, and most of those times it turns out to be a big hoax. Could this be the real deal? Aaron Levi was adopted in 1965, a few years ago he came across documentation about his biological parents. Even though the clues weren’t very clear he ultimately traced his birth mother who told him the story.

He is the son of a woman of English origin, they spoke over the phone for the first time in 2003 and she told Aaron about the fling she and the Kansas City super star had. It took him five-years to find her, and what he heard was in his words “somewhat devastating.”

According to Aaron’s mother, the pair met at a jazz club, through a mutual friend. They hit it off, and Wilt asked for her number, a couple of days later they went out. The relationship was all a blur to Aaron’s mother. Aaron couldn’t have turned out more different than his alleged star athlete father. He grew up to become an artist, with almost zero interest in sports and he is also gay. He struggled feeling different due to his looks and sexual preference, he was adopted by a white couple form Oregon and said he had a happy childhood with them.

You can read the whole story about Aaron on Sports Illustrated here.