Meet Teri & Dennis Hernandez; parents of former NFL player Aaron Hernandez; who was a tight end for the New England Patriots, until his 2013 arrest for the murder of Odin Lloyd in 2013.

Former New England Patriots tight end Aaron Hernandez was charged with first-degree murder of 27-year-old Odin Lloyd, a semi-professional football player and friend, days after his body was found in an industrial park near Hernandez’s home in North Attleboro. Hernandez also convicted of unlawful firearm possession and illegal ammunition possession. He will serve a life sentence without the possibility of parole. His father Dennis Hernandez passed away, but his mom Terri Hernandez has been a regular at his trial.

Hernandez “drove the victim to the remote spot, and he then orchestrated his execution. That’s what it was,” First Assistant District Attorney William McCauley said in Attleboro District Court. “He orchestrated the crime from the beginning and took steps to conceal and destroy evidence.”

Surprisingly, according to McCauley, the motive was that Hernandez caught Lloyd speaking to people Hernandez “had troubles with” at a Boston nightclub.

25-year-old Hernandez is staring at life in prison, after signing a $40 million contract with the Patriots. He has a young daughter.

Hernandez’ mother, Terri, was at her Bristol home on Wednesday, just hours before his arrangement in Massachusetts on murder charges. She told the Press that her son would be cleared of those accusations. 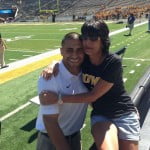 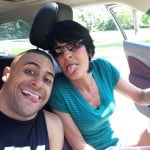 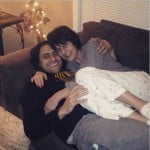 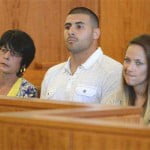 56-year-old Terri Valentine Hernandez born on April 20, 1959, is of Italian descent. She has worked as a secretary at South Side School in Bristol since 1994. Aaron was in kindergarten when she began working there. In 2012, the school held a pep rally for the Patriots and their ‘favorite son’ who were on their way to play in the Super Bowl. Terri, of course, was there, with all the kids and staff, and proudly wearing a “Super Bowl Mom” T-shirt.

Terri said that her son has a “big, big heart.” When asked about Aaron becoming a role model, she said:

“That’s how we brought them up, to do well in life.”

At the age of 17, Aaron Hernandez lost his father Dennis from complications after hernia surgery; he was 49. Aaron has a brother named D.J. Hernandez. Years after her husband’s death Terri re-marry Jeffrey D Cummings; they got divorced in 2010 while he was in jail for slashing Terri with a knife.

We have already introduced you to her mother Terri, so now let’s meet his father, Dennis: 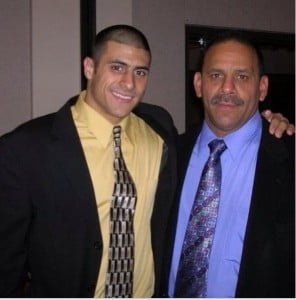 Dennis Hernandez passed away at the age of 49 on January 6, 2006 at Bristol Hospital after complications from routine hernia surgery. His son Aaron was 16 at the time. His funeral was held at O’Brien Funeral Home and was buried at St. Joseph Cemetery, Bristol. Dennis’ family asked for memorial donations to be made to the UCONN Foundation for the Alumni Association.

Dennis seemingly touched everyone he met. There’s a memorial in the courtyard of the high school where he worked. 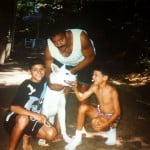 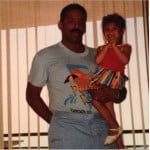 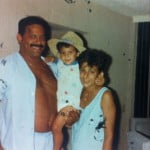 Aaron Hernandez has a tattoo on his left forearm with a favorite saying of his late father, Dennis, that reads:

“The difference between the impossible and the possible lies on a person’s determination,” reads another of his father’s favorite quotes on Aaron’s arm.

Aaron’s world was shattered when his father died and deeply impacted his life. He said:

“It was more like a shock. Everyone was close to my father, but I was the closest,”Aaron Hernandez says. “I was with him more than my friends. When that happened, who do I talk to, who do I hang with? It was tough.” 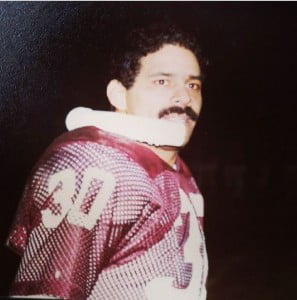 Dennis Hernandez, nicknamed “The King.” He was a prep star in Bristol, Connecticut in the 1970’s. Dennis played at Bristol Central. Like his older son, D.J., he played football at UConn, too.