Kelly Kay is a stunning model and influencer who made headlines over the weekend after she was revealed as the Super Bowl’s streaker.

Kelly who hails from the UK only made it a few feet from the stands before she was tackled by security. According to reports, as the blonde stunner was being taken away during the Kansas City Chiefs’ win against the San Francisco 49ers -she refused to leave without a bang and lifting her dress she flashed Super Bowl fans in the stand. 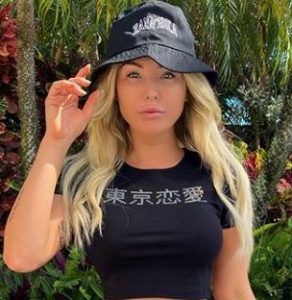 Kelly who was pinned to the ground and then led off the field -was named in a Twitter post by a fellow model Colleen McGinniss who wrote “You go babe, love you” -the tweet led to believe the stunt was made in order for the site Vitaly Uncensored.
She was then taken to a nearby police station. According to the Daily Mail -she was pictured leaving jail after spending the night. Kelly Kay was held on trespassing charges with a $1,000 bond.

The blonde bombshell was born November 29, 1985 in Liverpool, England. She arrived in the US first to Tennessee and later settling in California.

Kay is widely known for her success on both YouTube and Instagram. She uploaded the video I QUIT MY JOB TO START YOUTUBE in July 2017.
The model and influencer is also known as Kelly Green, she found her biggest audience on Instagram, posting revealing selfies and swimsuit photos for over 270k followers. In addition she also runs an OnlyFans account.

As a model she became a brand ambassador for KO Watches and Bang Energy. On the about section of her YouTube channel she says
‘Hiiii! My name is Kelly Green, a Tennessee girl living in a California world! I created this channel to let you guys in on my journey through life while I spread positivity, creativity, and good vibes! I hope you enjoy!! This is all for you guys’