Jamie Frontz is the woman who was the victim of an alleged vicious attack at the hands of Russian professional boxer, Sergey Kovalev.

Jamie’s alleged attacker started his professional career in the USA in 2009, and finished his first 9 fights with knockouts in the first or second rounds.
He also won silver at the Russian Junior Championships in 2000 and won gold medals at the World Military Championships in 2005 and 2007.

The Russian boxer became the WBA, WBO and IBF Light Heavyweight Champion after defeating Bernard Hopkins in 2014. He did not lose a single professional fight from his debut in 2009 through the end of 2014. 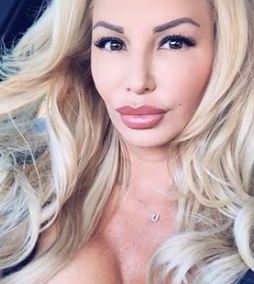 Now Kovalev who was charged with felony assault and pleaded not guilty could be convicted and could spend up to four years behind bars -after he allegedly caused Frontz -a model and actress -to have a broken nose, a concussion and a herniated disc on her neck.
The attack which occurred in 2018 sparked after Jamie says she denied his romantic advances after meeting him at the opening of a boxing gym in California.

Frontz told police that he followed her back to her cabin to make her pay. Frontz claims the former light heavyweight champ punched square in the face and she suffered a concussion and a displaced disk in her back as a result. In addition, the blonde also claims the “Krusher” brutalized her dog.
Frontz initially sued Kovalev demanding $8 million, however she agreed to drop the case after reaching a confidential settlement with the boxer. However, she is currently suing for breach of contract after Kovalev didn’t come trough with their initial agreement.

The gorgeous blonde who grew up in a farm in Northern Arizona, attended Show Low High School and studied Criminal justice at UNLV. She began her career participating in beauty pageants.

According to her LinkedIn, Jamie Frontz is an Actress/Model/ Television Host/influencer at Pretty Pink Acres. The blonde is the Co-Host of the radio show, Vegas Morning Vibe! and lists herself as a brand influencer at Revital U.
In addition she appeared in a number of magazines and has hosted many TV shows including Spy TV on NBC, Dude This Sucks on MTV, VH1’s Temptation Mountain, Rodeo Road, Scare Tactics on the Sci Fi Channel, etc.
41-year-old Jamie who describes herself as an avid equestrian lives in her own ranch in Las Vegas -called Pretty Pink Acres -where she has a number of animal including horses, pigs, dogs, birds and bucking bulls.
Find her on Instagram here.