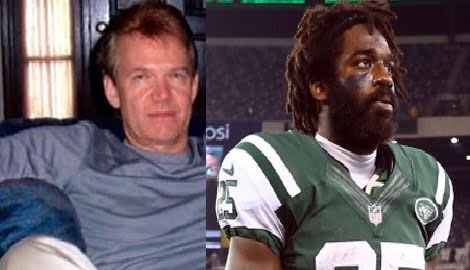 Ronald Gasser is a 54-year-old man who’s been identified as  the shooter of former NFL star, Joe McKnight. On December 1, 2016 Gasser opened fire against 28-year-old McKnight, ultimately taking his life.

According to authorities Gasser and McKnight got into an argument at an intersection, that turned fatal in New Orleans.

McKnight a –former return specialist and running back who played with the Kansas City Chiefs and the New York Jets –was shot more than once by Ronald Gasser.

The former NFL star was unarmed at the time of his death. Witnesses reported that EMTs tried to perform life-saving techniques on McKnight at the scene to no avail.

Joe is survived by his baby mama, Johanna Michelle Beltran. You can read all about her in the link below.

The Jefferson Parish Sheriff’s Office told media they’re investigating the shooting as a road rage incident. According to TMZ, Gasser stayed until police arrived and handed his gun without further incident.

Footage of his arrest has black social media users outraged over ‘soft police treatment’ of the white shooter.

NOLA reports that Ronald Gasser was taken into custody at the scene of McKnight’s shooting in Terrytown, five miles southeast of New Orleans.

According to his LinkedIn page, Ronald Gasser was educated at the Naval Air Technical Training Center. The page also says that Gasser has been the owner of LAN-TEL, a telecommunications consultancy business, since January 1996. The business is described as dealing with “office communication equipment, I.E. telephones, wiring.”

Gasser is also listed as the owner of Go Live Installs, a plumbing company.

Online obits show that his mother, Virginia, died in May 2000. His father also named Ronald, died in July 2015.

Ronald has a sister, Sharon Weileman –who said to media to be shocked at the news. She said of her brother ‘He’s the best guy, the most generous guy.”

Gasser is the father of daughter, Candice Gasser-Bua –who also said by phone to be in shock.

Residents of the area, told police they believe Ronald Gasser lives alone in his house and that he mostly kept to himself.

Mr. Gasser has no criminal records and could face life in jail.