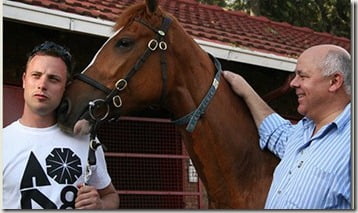 Mike G. Azzie is Pistorius’ friend, who has known him since he was a child. Azzie, or “Uncle Mike” to Pistorius, is a family friend who trained racehorses for “The Blade Runner”.

Azzie claims Pistorius is now a “broken man” after her had to sell his racehorses, cars, and properties in order to help finance the legal battle to prove his innocence after shooting his girlfriend Reeva Steenkamp at his home on Valentine’s Day.

When it comes to friends close to Pistorius, they claim he is on the verge of suicide. Azzie said in the documentary “Oscar Pistorius: What Really Happened?”, set to air on Monday night, that he talks constantly about Steenkamp.

“He just always seems to mention Reeva and to ask us to pray for her and her family,” he said. “But most of all, you’ve got to understand that we are there for him and we will always be his friend. He has no confidence in his tone of voice and he is just a man that is almost like someone that is walking around in circles and doesn’t know where he is going.”

“I would say that, just speaking to him, that he is a broken man and that I would go as far to say that he would be on the verge of suicide. It really worries me.”

Mike Azzie is a racehorse trainer from South Africa. He is also Pistorius business partner. Mike has a 24-year-old son named Adam Andrew Azzie who is a trainer as well and one of South African racing’s rising young stars. Mike’s father was “training colossus” George Azzie.

Mike Azzie is married to Sharon Azzie. Together they have two daughters, Alexis and Gabby, and three sons, Adam and his twin Dexter, and younger Ryan.

“If you ask me do you believe Oscar could do it, I’d have to say no. Because I’ve never ever seen that side of him.  But in life there are those moments of madness, where people just are uncontrollable, and I pray to god that that’s not the case with him.”

Pistorius lawyers are battling to modify his bail conditions while he awaits his next court appearance on June 4.

Take a look at Mike’s profile as a trainer on RacingUK here. And on SkySports here.

Oscar might not be feeling happy about Mike’s statements, as he and his family said he is not suicidal..

“Oscar is in deep mourning but despite the tragic circumstances he is certainly not suicidal,” said a statement issued by Pistorius’ uncle, Arnold Pistorius. He said Pistorius has support from his family.

“Oscar, broken as he currently is, believes he has a purpose in life and is working towards that.”