Anthony & Wanda Hernandez are the proud parents of the amazing young gymnast Laurie Hernandez, the Puerto Rican/ American gymnast known as the Human Emoji. She is a member of the Gymnastic National Team that represented the United States in Brazil in the 2016 Summer Olympics.

In September, 2016, Laurie added herself to the list of amazing gymnastics that have competed Dancing With the Stars. Not only Laurie teamed up with professional dancer Valentin Chmerkovskiy for the show’s 23rd season, but she is getting a lot of 10’s from the DWTS judges. 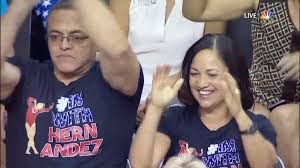 Anthony and Wanda Hernandez are both Puerto Ricans.

Mr. and Mrs. Hernandez are the proud parents of three incredible children, Jelysa,Marcus and the lovely Laurie also known as Lolo.

All three of their children are athletes.

Their eldest daughter Jelysa is a black belt in karate

Anthony Hernandez, known as Tony is a county clerk.

Anthony & Wanda Hernandez first lived in Brooklyn, before they moved to New Jersey, where they settled in New Brunswick.