Kobe & Gianna Bryant will be honored today in Los Angeles as hundreds of mourners gather to celebrate the lives of the father-daughter duo.

Kobe & Gianna Bryant were killed in a tragic helicopter crash on January 26, 2020; that claimed the lives of nine people in total. Since then a number of tributes have taken place; and in today’s memorial service fans all over will reflect on Bryant’s life and mourn the loss of the basketball legend and his daughter.
Bryant and his 13-year-old talented daughter were laid to rest in a cemetery in Southern California on February 7. That same day Vanessa Bryant announced on Instagram the public memorial for her late husband and daughter. 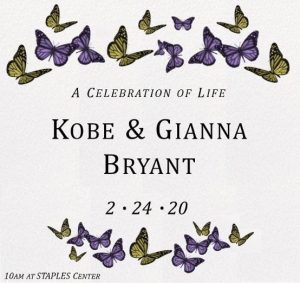 The date, 2/24 -was chosen to honor father and daughter as Bryant wore the number 24 in the latter part of his NBA career, while Gianna wore the number 2 for her youth basketball teams.
Where is it?
The service will begin at 10 a.m. PT (1 p.m. ET) on Monday at the Staples Center, where Bryant played for the Los Angeles Lakers -in downtown L.A.
Where to watch?
For those unable to attend, coverage of the service will be available on CNN’s website. In addition, local Los Angeles TV stations are expected to broadcast the event live.
NBA TV will carry the memorial service, according to the schedule on its website, with a 4-hour block beginning at 1 p.m. ET.
According to the Los Angeles Lakers’ website, live streams will be available on Facebook, YouTube and elsewhere.
Tickets?
Tickets to the memorial, are now sold out.
Passes were sold in three price ranges: $224, two tickets for $224, or $24.02 apiece. It is unclear how many will attend however, the Staples Center can seat about 20,000 people for non-sports events.
Proceeds are being donated to the Mamba and Mambacita Sports Foundation, a charity that strives to honor the legacies of Bryant and Gianna.

There will not be any overflow viewings or screens outside the Staples Center broadcasting the ceremony, so organizers are asking that people without tickets not come to the arena.