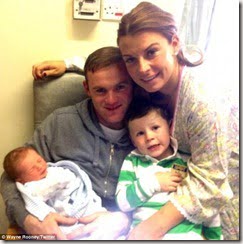 27-year-old Wayne Rooney announced on Twitter that his wife Coleen gave birth to their second son, Klay Anthony, in the early hours of Tuesday morning. The footballer posted a family picture where he is seen cradling his newborn while three-year-old Kai sits on his lap and Coleen embraces them. 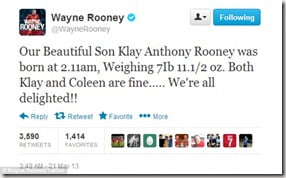 Coleen, who is a fashion designer, had revealed over the weekend that she had passed her due date and reportedly was taken to the hospital on Saturday, after having trouble sleeping the night before.

“It’s been really good, but I am looking forward to having a good night’s sleep. I have to keep getting up in the night because I can’t get comfortable.”

Klay’s big brother Kai is seen arriving at Liverpool Women’s Hospital on Tuesday morning to meet his new baby brother with his grandparents Colette and Tony McLoughlin. The 3-year-old was carrying an “It’s a baby boy” balloon.

“Made up for @ColeenRoo and @WayneRooney ..well done , another nephew to put on the naughty step!!”

Wayne and Coleen married in Italy in 2008 after a five-year engagement. She had previously admitted she would love to have a large family:

“I’d like to have maybe three or four children. I’d be happy to be a full-time mum.”