Jackie Towns is the lovely mother of NBA player, Karl Anthony Towns -best known as a player for the Minnesota Timberwolves.

24-year-old Karl-Anthony Towns has lost his mother to the coronavirus; the tragic news was confirmed today by the Minnesota Timberwolves. Karl had announced late in March that his mother was in a coma due to COVID-19. Mrs. Towns was 58.

Jackie Towns was born Jacqueline Cruz and was of Dominican origin. She and her husband, Karl Towns Sr. -who played basketball at Monmouth University -welcomed their son November 15, 1995. 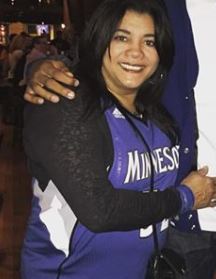 While attending St. Joseph High School, their son twice recorded the rare quadruple double, achieving double-digit numbers in points, rebounds, assists, and blocks. He also played for the Dominican Republic national team as a sixteen-year-old.
Karl went onto play one season of college basketball at the University of Kentucky, helping the team win 38 straight games before losing to University of Wisconsin in the Final Four.
As it was expected, the young player was then selected first overall in the 2015 NBA Draft by the Minnesota Timberwolves. In 2016, he was named NBA Rookie of the year and made his first NBA All-Star Team in 2018.
Towns and the Timberwolves entered a hiatus with a 19-45 record, following the suspension of the 2019-20 season.

Jackie Towns certainly witnessed and enjoyed her son’s journey into becoming an NBA star. According to Karl’s Instagram video, both his parents tested positive for Covid19 but his father felt better and was sent home.
Jackie Towns however, became ill, then her fever spiked and she quickly deteriorated. She fought for weeks in the ICU.
She’s been described as a wife, mother, daughter, grandmother, sister, aunt, and friend.