Aaron Hernandez was arrested Wednesday and charged with first-degree murder of his friend, 27-year-old Odin Lloyd. Hernandez, released by the Patriots less than two hours after his arrest, pleaded not guilty and has been ordered to be held without bail. 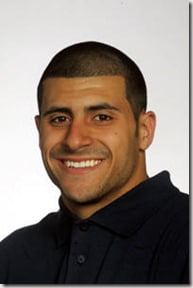 Dennis John Hernandez, known as DJ Hernandez, was born on May 18, 1986, in Bristol, Connecticut. His parents are Dennis Hernandez who was of Puerto Rican descent, and Terri Hernandez of Italian and Irish descent. Hernandez attended Bristol Central High School and earned a bachelor’s of science and master’s degree in Educational Psychology from Connecticut in 2008 and a master’s degree in 2011 from UConn school counseling. Hernandez has been player and coach for the Carinthian Black Lions in Klagenfurt, Austria. He also was a two-year captain at the University of Connecticut, where he played both quarterback and wide receiver from 2004 to 2009. 27-year-old DJ has earned both the Football Alumni Award and the Iron Husky Award. Recognized as a Scholar Athlete in 2008 and made Dean’s List in both 2007 and 2008. Hernandez was honored as the Connecticut Gatorade Player of the Year in 2003.