The lovely Dee Devlin makes it double the excitement as you know she will be in attendance. Her man’s rise since his 2013 UFC debut has been nothing but brilliant. Bleacher report notes, by his third fight he was the featured attraction in the main event of a successful television card in Dublin, Ireland. 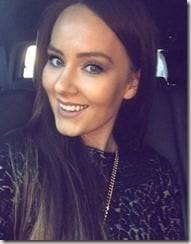 But of course, not everything can be all good, specially in the highly competitive world of sports. That’s where Dee Devlin comes in. The fighter credits much of his success to the stunning gal. He told the Irish Mirror

“My girlfriend has been there since the start,” “She has helped me throughout this career. If it wasn’t for her, I probably wouldn’t be here today.

He also hinted the lifestyle the couple leads nowadays saying:

“My girlfriend worked very hard throughout the years and stuck by me when I had essentially nothing,”  “For me to be able to take her out of work, give her everything she’s ever wanted and to travel the world with, fills me with pride.” Dee is the ultimate UFC girlfriend. From the beginning of the relationship she understood and supported the dedication required to become a UFC champion. The brunette might also be a bit of a psychic, saying she always knew Conor would reach this level.

The lovebirds have been going strong for the past eight years, after meeting at an Irish club.

Dee Devlin is a native of Walkinstown, Ireland. She said during an interview even thought they started talking later after they met, she felt instantly attracted to him.

Though Dee still gets nervous watching him fight, she is his number one fan and is always present during bouts. The lovely woman stopped working in 2015 and is now employed by her man. She helps him manage his finances, isn’t that every woman’s dream!