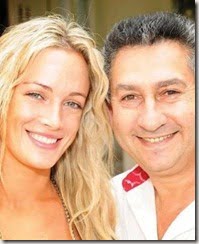 Cecil Myers is Reeva Steenkamp’s second dad. He is Gina Myers’ father, one of Steenkamp’s best friends, and he treated the model as her own daughter.

Steenkamp had been part of the Myers family for six years, she had lived with them full time since September and referred to Myers as her “Joburg dad.” Reeva had a very close friendship with Gina, one of Cecil Myers’ two daughters.

Cecil blames himself for Steenkamp’s death because he feels he didn’t protect her and failed to prevent her tragedy.

“How well did I look after her? She was shot,” Myers told South Africa’s News 24 in Johannesburg.

that she’d stay with the runner instead of coming home.

“Hi guys, I’m too tired. It’s too far to drive. I’m sleeping at Oscar’s tonight. See you tomorrow,” she wrote.

The model was so tight with Myers she would let him know when she wasn’t coming home, including on the night of her violent end. Cecil Myers told South Africa’s City Press newspaper:

“I’ve got this thing with all three children (Reeva, and his daughters Kim and Gina), if they don’t come home at night, they must text me.”

Myers had the hard task of identifying Steenkamp’s body after she was shot on Valentine’s Day at Oscar Pistorius’ home.

“We looked at her through a glass window. She was…you know…the way someone looks who has been shot,” Myers told News 24.

“Luckily my son was there for me, because I broke down. The way she looked…that will remain with me forever.”

Myers said Pistorius raised red flags early in the couple’s relationship and that he was very nice and charming when he and Reeva started dating but once they actually started going steady, that charm started to dissipate.

“Oscar was hasty and impatient and very moody,” he said. “There’s a dark side to him. And all we’re left with now is a huge emptiness.”

“I once talked to her about Oscar’s moodiness. She didn’t answer me.”

He is skeptical of Pistorius’ claims that the shooting was an accident.

“She was my little girl, and he shot her four times from behind a closed door. One shot may have been a mistake, but four times?” Myers said. “Whatever happens, whether he goes to jail or not he can rot in ****. His conscience will get the better of him”, he said.

In his rage Myers smashed a large portrait of himself posing with both Steenkamp and Pistorius.

Cecil’s daughter and Reeva’s close friend Gina is a celebrity make-up artist and national make up artist for Elizabeth Arden South Africa. She has worked for magazines like FHM, Cosmopolitan, YOU, Drum, Heat and Glamour. She has travelled and worked on locations all over the world. According to her Twitter profile she is a shoe lover.