Wendell Pierce has gotten himself into a lot of trouble! The 52-year-old Actor and Tony Award-Winning Producer is now facing a real-life drama!

The Wire and TREME actor has been charged with simple battery after allegedly attacking a woman, and all because she is a Bernie Sanders fan! The actor who splits his time between Los Angeles, New York City, and New Orleans –got physical with the unidentified lady, outside the Atlanta Lowes Hotel on Sunday.

Wendell Pierce is in Atlanta to shoot the upcoming movie One Last Thing, the Atlanta Journal-Constitution reported and is a guest at the hotel.
Pierce –who has voiced his support for Hillary Clinton in the past and serves on a campaign created by the Clinton Foundation –is accused of grabbing the woman by the hair and smacking her head.

According to TMZ, he was arrested after allegedly pushing a man and smacking a woman. He was released on a $1,000 bond.

Pierce was born in New Orleans, Louisiana and attended Benjamin Franklin High School. He attended the New Orleans Centre for Creative Arts high school where he graduated as a Presidential Scholar. Pierce attended the Juilliard School and began appearing in small film roles by 1985. 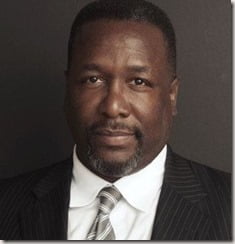 Pierce appeared with Forrest Whitaker as an undertaker’s assistant in the 1991 film, “A Rage In Harlem.” He played Secret Service Agent Richard Gill in the 1995 film Hackers.

He also appeared in Spike Lee’s 1996 movie, Get on the Bus, and Forrest Whitaker’s Waiting to Exhale a year earlier. Pierce also had a role in the 1996 film Sleepers, playing Rizzo’s older brother Little Caesar.

In addition he played a role in the 2003 film The Fighting Temptations as Reverend Lewis, and 2006 horror movie Stay Alive. He played Slick in the 2007 film Life Support; Slick is the HIV positive husband of the main character Ana (played by Queen Latifah).

He starred in all five seasons of the HBO drama The Wire as Detective Bunk Moreland –for which he was nominated for an NAACP Image Award for Outstanding Support Actor in a Drama Series for the role in 2007.

Pierce –who has been praised for giving back to his native New Orleans –appears to have never been married. Not much is known about his private life and the author of “The Wind in the Reeds” is believed to be single.