Tonya Couch is the mother of Ethan Couch –the teen who in 2013 gained national attention for using the “affluenza” defense in court and then receiving a 10-year-probation sentence, that stunned the victim’s families and spectators across the country.

Ethan ended up killing four in a drunken-driving accident. As you might have heard, a video of him drinking recently surfaced. Clearly showing he violated his probation.

According to the NY Daily News, the FBI has joined the search for Ethan –who’s MIA after he missed a probation hearing earlier this month.

Authorities believe he may have fled the country and that his mother, Tonya Couch is with him.

Ethan’s mother is also missing and police told media outlets they fear, she may have helped him scape the country. We told you about Tonya’s ex-husband (Ethan’s father) in a previous post, you can read about him below.

At the time of the accident, Tonya and Fred Couch, made no public comments. It was soon discovered both Tonya and her ex-husband had court documents stretching back more than a decade in felonies.

Tonya Couch divorced Fred Couch in 2006. A social worker was appointed to evaluate them and Ethan. At the time the social worker reports says Fred, told Tonya had a pill addiction and that she’d given Vicodin to Ethan more than once. While Tonya Couch said the marriage ended because Fred had been verbally and physically abusive.

Tonya was born in Paris, Texas, and quit school when she was 15. She was married and pregnant by 18 and divorced less than 10 years later. She gave birth to two children from her first marriage.

She managed to her her GED and worked briefly as a vocational nurse. 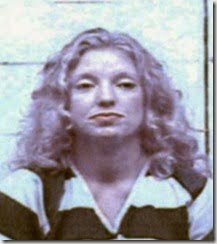 Fred and Tonya met at Lake Pat Cleburne. They tied the knot in 1996 and she gave birth to Ethan in April of 1997. Like her hubby and youngest son (Ethan), Tonya has her own arrest record –including a charge of reckless driving for running a car off the road.

While being married to Fred, she periodically ran errands and answered phones for his company.

Following Ethan’s wreckage in 2013. Both Tonya and Fred were required to sit for depositions. It was concluded they gave Ethan incredible freedom and as a result of his upbringing, Ethan felt no consequences for his behavior.

Do you think Tonya Couchs’ son will ever face the weight of the law?