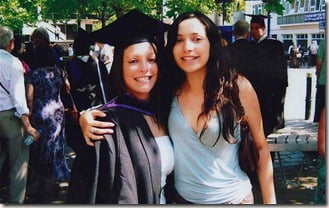 British student Meredith Kercher, known as Mez, was murdered in the university town of Perugia, Italy, in 2007. Meredith, who was 21 at the time of her death, was found dead on the floor of her bedroom with stab wounds to the throat. Her roommate Amanda Knox, and her then-boyfriend Raffaele Sollecito were convicted on charges of sexual assault and murder in December 2009.

Stephanie Kercher is Meredith’s older sister. Her father, John, is a freelance journalist, and her mother, Arline, a housewife who was born in India.

Speaking about the new trial scheduled for Knox and Sollecito, Stephanie said:

“There are obviously a lot of unanswered questions still, so we just hope that the outcome will answer those. All that we want is justice for Mez, but there is still a long journey ahead of us. But it’s making sure that we find out exactly what did happen that night. Nothing’s going to bring her back. We know that, but we have to do what we can for her as well.”

Stephanie Kercher and her family set up a trust in Meredith’s name which is helping to pay legal costs in the case, and would eventually support people who found themselves in a similar situation.

“It’s about doing something a bit more positive. I think Mez always liked to help other people so if I can do something for her then that’s what I’ll do”, Stephanie said.

Meredith’s sister Stephanie was honored at the 2012 Cosmopolitan Women of the Year Awards last year at London’s Victoria and Albert Museum, celebrating the ‘resilience and strength’ she has shown in supporting her family. She received the Ultimate Editor’s Choice accolade at the event, which celebrates the year’s most inspirational figure. Cosmopolitan editor Louise Court said:

“Since the death of her sister, Meredith, Stephanie remains an inspiring figure of strength and support. Most impressive of all is her single-minded desire to ensure her sister isn’t forgotten and to make sure her personality shines through any projects she undertakes. A devoted daughter and sister who has shown extraordinary courage and love in the most difficult circumstances, Stephanie is fully deserving of her award.”

Stephanie published an open letter in which she described the pain she felt because of her sister’s death. She said:

“I cannot remember what I thought – it was a mixture of disbelief and sheer pain. I did not know what to think or do and then my body just sunk. When I arrived at Mum’s, the pain in my chest was unbearable as I was told the few details of what had happened. ‘Thoughts and scenarios were racing through my head faster than I could comprehend and I collapsed into my parents’ arms, filled with the fear Meredith must have endured that night.”

Stephanie is 30 years old, she is an Italian speaker so she has represented her family throughout the judicial process.