Police officers are usually praised for their good work but once in a while you get the ones like Stacey Staniland. Meet the 29-year-old who’s been arrested for the third time in just eight months!

Reports say the ‘bad cop’ was busted earlier this week, after she got her unregistered motorcycle into two vehicles at a red light! When police arrived they found on her drug paraphernalia –which might have caused her to lose control of her bike. 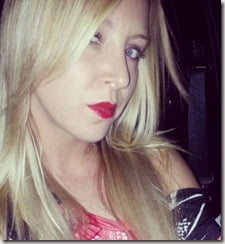 Stacey –who attended Curtis High School –knows all about the booking procedures, –not only because she swore to protect and serve the public but because she’s been at it before. Her rap sheet includes being arrested for drug possession while on duty and stealing jewelry from her boyfriend’s mother. 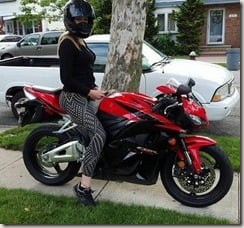 The blue eyed, first got in trouble with the law last December, when she allegedly stole several pieces of jewelry, including necklaces and bracelets, before taking them to a pawn shop. She took her loot after breaking into her boyfriend’s mother’s home in Staten Island.

Staniland got into her bad ways most recently in May, while on duty in Brooklyn she was charged with possession of a hypodermic instrument and drug possession.

During her latest arrest (third) on Tuesday, a silver spoon and a syringe were found in her bag along with several prescription drugs with ‘no proof of prescription’, according to a police report quoted by SILive.com.
The tattooed cop was temporarily suspended after the first two incidents, which are still pending. Before she was suspended she was assigned to the 122nd Precinct in New Dorp.