Neysi Perez is the 16-year-old who is making headlines around the world! As crazy as it sounds Perez, a Honduras native was buried alive after she was declared dead by doctors in her home country!

Perez was already a married woman and was three months pregnant when she allegedly suffered a panic attack which made her seem temporary dead. After she was pronounced dead at a hospital in La Entrada, western Honduras, her husband, parents and other relatives proceeded to bury her.

According to the Mirror, the following day her husband returned to the cemetery and allegedly heard noises and what he described as Neysi’s voice, he desperately asked for help and family members arrived and opened the grave until they got to the body of Neysi, they said she showed scratches on her forehead and bruises on her fingers giving the idea that she tried to get out of the casket.

She was rushed to a nearby hospital where doctors declared her dead, for a second and unfortunately final time. 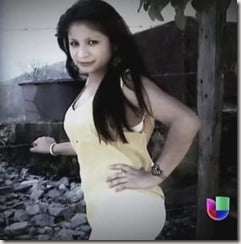 Neysi allegedly got up to the toilet one night and fell unconscious after an apparent panic attack after hearing a burst of gunfire. Her parents first called for a priest but she was later taken to the hospital, within three hours she was called dead.

The second time she was taken to the hospital where she was carried in still inside her coffin, medics tried to revive her, following the claim of her relatives but all the tests they carried out showed that she was clinically dead.

Outlets say there could be a couple of theories to explain what happened to the teen mother to be; according to the Daily Mail, doctors believe Ms Perez may have suffered a severe panic attack which could have temporarily stopped her heart activity.

Another hypothesis is that the teenager had a cataplexy attack, an abrupt temporary loss of voluntary muscle function during which the victim maintains full conscious awareness.

She may then have died from lack of oxygen after waking up inside the closed coffin.

Footage of Neysi’s relatives shows them desperately trying to break the concrete block tomb with a sledgehammer after they were told the girl was screaming inside, claims that were also confirmed by a cemetery worker who also said he head heard noises coming from the grave.

Her family ultimately blames the doctors for being too quick to sign her death certificate.