Maurice Crawley is a well known activists in Syracuse who was taken into custody while he filmed another man as he was being arrested by police.

According to several reports, Crawley –who is a member of “OGs against violence,” –had an exchange of words with the officers who were taking in a man –who had been in a car that was pulled over.

Thought it is not clear what exactly prompted the arrest that he was filming, is sure to say, Crawley ended in the same situation.

Crawley was standing across the street from the officers as he was streaming live on his Facebook page. A few minutes into the footage, one of the officers can be heard saying: “Say one more word and I’ll arrest your (expletive).”

At this time, Maurice Crawley had been narrating “see what’s going on with these boys, make sure they’re doing everything they’re supposed to be doing.”

In his video, Crawley can also be heard calling one of the officers, “Uncle Tom.” 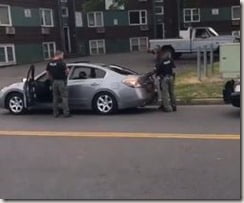 Crawley then responds to the officer’s threat to be quiet by replying: “What? I didn’t hear you.”

The officer then approaches Crawley and tells him to put his hands behind his back. One more time, Crawley, tells the officer that he couldn’t hear what he said and then the video goes green.

At that point Crawley was obviously arrested and the live streaming interrupted.

52-year-old Maurice Crawley spent the night at the Onondaga County Justice Center jail and was charged with resisting arrest and obstructing government administration. According to the NY Daily News, he pleaded not guilty to the charges, and was released.

Maurice Crawley is an anti-violence activist. He is known for his presence at shooting scenes and is often seen holding large signs advocating against violence.

The arrest of the “OG” quickly prompted a Black Lives Matter protest. The OG’s against violence stands for “older gentleman” who work to reduce violence in Syracuse. Crawley is in charge of patrolling certain areas.