Kris Jason is the husband of Los Angeles based model, Sarah Stage. His wife is being the target of nasty comments online!

According to TMZ, the model who gave birth to the couple’s first child back in April, is getting serious backlash after posting an Instagram snap of her kid on a nasty carpet mall!

Sarah posted the image on her Snapchat and it was published by thedirty.com, showing 8-month-old James on the ground. She claims her son was laying on what she says is a clean blanket.

We first heard about Sarah –who is a Lingerie and fitness model –earlier this year, when she ignited controversy  with her pregnancy six-pack.

just five weeks after welcoming a healthy 8-pound baby boy –named James Henry –she was back in bikini and looking smoking hot!

Sarah is of Costa Rican and European descent. She grew up with her parents and younger sister in Burbank, California.

According to Elite Daily, while attending high school she decided to enter an Elite Models Search and was a runner up. From there Sarah headed to Milan, Italy where she furthered her career as a high fashion model.

Since then she has done several national print campaigns, runway shows, tv shows, commercials and spokesmodel jobs. Outside of the busy world of show business, Sarah enjoys oil painting, traveling over seas, salsa dancing and being an active animal rights activist. The wife and mother of one, alos runs her own blog called, Stage Mama. Her aim is to share her motherhood journey with her fans. 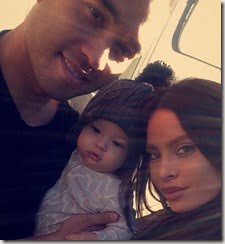 Kris Jason born Kristopher Jason, works in Public Relations according to  his social media info. Kris and Sarah tied the knot back in 2012.

According to an article about their magical nuptials, Kris Jason and Sarah grew up in the same town and attended nearby schools but never met each other. Both discouraged with the dating scene and feeling burned by past relationships, they agreed to be introduced by a mutual friend. And she knew…and he knew… They had finally found each other. They held their wedding at the LA Arboretum.

Would you leave your son sound off on a ***** department store dressing room?