Jordan Loewe is the girlfriend of 26-year-old Track Palin. You know, the oldest child of Sarah Palin, the former Alaska Gov. and 2008 Republican vice presidential nominee and conservative leader.

According to docs filed this week by Jordan Loewe –identified by the Washington Post –she is accusing Sarah Palin’s son of domestic assault.

In the docs, Jordan Loewe said Palin kicked her in the knee and she also presented had bruising and swelling around her left eye.

Palin is being charged with assault, interfering with the report of a domestic violence crime and possessing a weapon while intoxicated.

According to an affidavit, the incident that took place on Monday at the Wasilla home of his parents, left Jordan Loewe hiding under a bed inside and crying.

Both Jordan and Palin called 911. When the officer arrived, he found Palin outside walking and talking on the phone. He was immediately put on handcuffs after the officer smelled alcohol.

Jordan told authorities her boyfriend of one year had punched her in the face and he also threw her phone across the driveway. After she got her phone the hostility continued inside where Palin allegedly held the rifle, with the barrel just away from his face pointed to the side, the affidavit states. The affidavit adds that Jordan told police Palin was yelling “Do you think I won’t do it?”

After he went outside and ran around the house Jordan Loewe, went upstairs and hid under the bed. 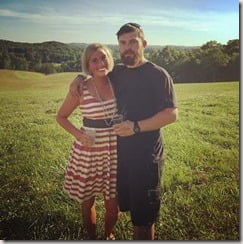 Track Palin spent a year deployed in Iraq with the Army. When his mother was the GOP vice-presidential candidate in 2008, she spoke at her son’s deployment ceremony in Fairbanks, one of the few trips back to Alaska while on the campaign trail that fall.

Track Palin enlisted in the Army on the sixth anniversary of the Sept. 11, 2001, terrorist attacks.

In 2012, Track filed for divorce from his high school sweetheart, Britta Palin. The pair, who tied the knot in May 2011; filed divorce docs in Alaska and have reportedly resolved any property and child custody disputes. They are parents to a 4-year-old daughter, Kyla, who was born just three months after their wedding.

According to the NY Daily News, Jordan and Track began the argument, after he learned she was in touch with her ex-boyfriend.

So does it mean, Jordan Loewe and Palin are not together anymore?

According to ET, Palin has not plead guilty to any charges.