John Brewer is married to one of the most powerful women in business. He is the husband of Sam’s Club President and CEO, Rosalinda Brewer. His wife is currently under heat after making diversity comments.

In the interview with CNN’s Poppy Harlow that aired last week, Brewer talked candidly about her commitment to diversity.

After Brewer shared an anecdote about meeting with one supplier earlier that day. The 53-year-old spurred a lot of backlash. People called her a “racist” and encouraged a boycott of Sam’s Club stores using the hashtag #boycottracistsamsclub.

Rosalinda Brewer said: “The entire other side of the table was all Caucasian male,” “That was interesting.” She said that while she chose not to address it with everyone in the room, she was “going to place a call” to the supplier.

According to Fortune Magazine, Brewer, managed to increase Sam’s operating income faster than revenue, which has been disappointing; same-store sales were flat. The Lockheed board member is investing in digital and going big on health and wellness, more than doubling the organic offerings at Sam’s Clubs.

Brewer joined Wal-Mart in 2006 as regional vice president responsible for overseeing operations in Georgia. She became division president of the Southeast and later president of Wal-Mart East. Prior to joining Wal-Mart, Brewer worked for 22 years at Kimberly-Clark Corp. where she started as a scientist and eventually becoming president of the Global Nonwovens Sector in 2004.

She is currently president and CEO of Sam’s Club, a division of Wal-Mart Stores Inc., which has revenues of $56 billion and more than 600 locations nationwide. Brewer joined Sam’s Club in February 2012, bringing a wealth of talent to the members-only warehouse operating segment that serves the needs of individual and small-business members.

Rosalinda –who is a Spelman alumna and Board of Trustees Chair C’84,  was named one of the 50 Most Powerful Women by Fortune magazine, earlier this year. 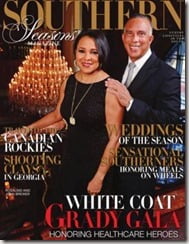 Brewer is married to John, who she met while studying at Spelman, and he was at Morehouse. The couple has two children.

According to AY Mag, John Brewer is a former investment banker who became a stay-at-home dad.

According to a 2002 article, John Brewer, played a key role in the resource gathering necessary to generate the integrated credit platform aimed for by BoA. John Brewer joined as head of European investment grade training from his co-head position at Goldman Sachs.

John Brewer and his wife and children reside in Atlanta, Georgia.

What do you think of Rosalinda’s comments?