47-year-old James Bushey was shot to death by police officers in Texas after he pulled out a bb gun on them. Reports say Mr. Bushey’s blood work showed he had 19 times the legal limit of alcohol in his blood.

Bushey was found at an Applebee’s located in the town of Palestine. He was apprehended in Applebee’s bathroom and was being marched out of the family restaurant when he pulled out of his shorts a life-like handgun. 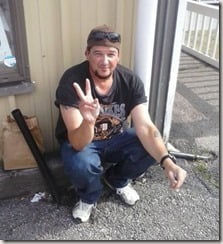 The regrettable incident was caught by officer body cameras which lasted less than two minutes. The stunning moments show James being escorted out, pulling out the gun in his right hand, then spinning round after reaching into his shorts.

He is pushed away by another officer who immediately draws his weapon and unloads at least eight rounds into Bushey. Reports say cops confronted James Bushey into the Applebee’s restaurant because they believed he had been running after stealing beer from a nearby Walmart.

The tragic shooting took place May 31 according to the footage. The police officers involved where placed on light duties according to KLTV while the unfortunate incident was investigated.

James Bushey’s family members revealed he had recently moved to Texas following a divorce, they also said he was a recovering alcoholic.

According to one of his Facebook profiles (he has at least three), he attended Kingswood Regional High School in Wolfeboro, New Hampshire. He called Ossipee, New Hampshire his hometown and listed Palestine, TX his current city.

The about section reveals he was a father of two:

Hey whats up most of u probably already know but im Jim. I Live in Nh ,i have 2 beautiful daughters. i work for myself. have 9 siblings and i absolutly love nascar. wanna know more write me a message

Both cops were cleared by a judge and have since returned to regular work.