German Gabriel Canalla is the man behind the picture used for a sexually explicit Greta Thunberg sticker. However, the young artist claims his design was stolen.

Canalla, a tattoo artist is said to have illustrated the image of a naked woman, shown from the back with a man’s hands pulling her braids -however he has come forward saying his work was plagiarized. German claims the Canadian oilfield company allegedly altered the image.
He took to Instagram where he wrote ‘They stole my design! I never make my drawing with that purpose’ -He also shared the original design which was made in 2016 and shows the image without the “Greta” text or X-Site Energy Services logo included on the sticker.

German Gabriel Canalla noted the image after someone reached out to him to tell him about the similarities in his design. I it basically the same image but without the name Greta written across the back. 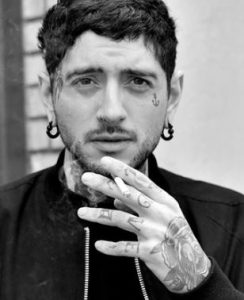 Canalla’s social media accounts are filled with explicit images showcasing his work as a tattoo artist.
According to his social media, German Gabriel Canalla is originally from Mercedes, Buenos Aires. He is currently listed as Self-Employed and works at Melanía.
He is also in a relationship with fellow Argentinian, Qam Qam -who is a freelance model.

Canalla appears to have travel to Europe including Berlin and London -where he was a guest tattoo artist at Inkslingers Tattoo Studio in Newcastle Upon Tyne.
According to a profile, ‘German Gabriel Canalla is a self made artist and tattooer, mostly known for his ****** and ‘****o’ designs, he has being traveling in South America and Europe for the last 5 years. Love and family mean everything to him’

According to an interview, when asked ‘what got you started on tattooing’ he replied ‘Disney’