Chad Daybell is the husband of Idaho mom Lori Vallow -currently facing charges for the disappearance of two of her children.

His wife Lori would be his second wife, he was previously married to Tammy Daybell for 30-years. According to reports, his first wife died last October at age 49 in what police calls ‘suspicious circumstances’
Shortly after the death of the first Mrs. Daybell, widower Chad went onto tied the knot to Lori Cox Vallow.

Since the couple got together a string of strange events have taken place.

Numerous reports also point out the possibility of the new couple Chad and Lori -belonging to a religious and dangerous cult. 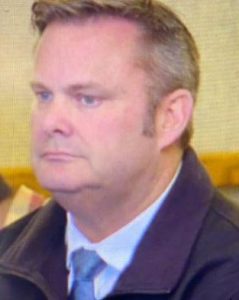 Chad Daybell was born on August 11, 1968, in Provo, Utah. The 51-year-old ‘has worked in the publishing business for the past two decades and has written more than 25 books’ According to his website, he is currently the president of Spring Creek Book Company.

He has written more than two dozen LDS-based books, including the best-selling Standing in Holy Places series.
He is the author of Times of Turmoil, Standing in Holy Places, Chasing Paradise and The Emma Trilogy. In addition to novels, he’s also written non-fiction books for youth. He and his wife Tammy also created the Tiny Talks series for Primary children.

His first wife was found dead in her Fremont County home on Oct. 19. At first, her death was ruled natural but the Fremont County Sheriff’s Office later launched an investigation into the possibility that it was suspicious. Daybell reportedly received $430,000 in life insurance after Tammy Daybell died.
From his longtime marriage to late wife Tammy, it is believed that Daybell has five children.

His current wife, Lori Vallo is charged with felony child abandonment and had her bond reduced to $1 million. The couple had been living in Hawaii since late last year with no children. Chad is not facing any charges.

Daybell was arrested after human remains were found at his home in East Idaho, on June 9, 2020.

“Throughout the investigation, detectives and investigators have recovered what’s believed to be human remains that have not been identified at this time,”

“Chad Daybell, who resides at that residence [where the remains were found] has also been taken into custody for questioning in regards to that.”