Aimee Toms is the woman who was harassed in a Walmart restroom by a woman who apparently thought Aimee was a transgender.

Aimee Toms spoke about her experience on a Facebook video –which has been viewed over 20,000 times since the incident on Friday –since then internet trolls have threatened her and have called her a ******* and a *****. She wrote along with the video:

If it really takes me pulling up my shirt and showing someone I grew these ***** myself for them to leave me alone in a restroom, I don’t want to live on this planet anymore.

This really lit a fire under my *** today.

The 22-year-old Connecticut resident spoke about how she was in washing her hands in the bathroom at a Danbury Walmart on Friday when a woman suddenly approached her from behind and yelled, “You are not supposed to be here! You need to leave!” The woman then flipped off Toms, told her she’s “disgusting” and stormed out.

A confused Aimee Toms, first thought the woman had mistakenly confused her with a worker from a different store hence telling her she didn’t belong, but as Aimee responded ‘Yes, I do.'” and turned around, her attacker learned Aimee Toms is not a flat chested person,  the discriminator then opted to flipped Aimee.

Toms realized that she had likely been discriminated against because of her short haircut appearance and had just experienced an encounter that was part of the ongoing controversy over bathroom legislation that seeks to force people to use the bathroom that aligns with their birth gender.

“I can get why at first glance she would mistake me for somebody who’s transgender,” Toms revealed. That day she was wearing a baseball cap and her short pixie hair look, did the deed. She did not report the incident, in the meantime, Walmart still doesn’t have a clear stand about transgender bathroom use. 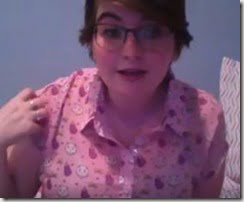 Aimee Toms defines herself as is cisgender and is currently dating a man. It is not the first time she has had a scare, she once was followed by a man into a women’s bathroom and tried to rape her.

Aimee Toms is originally from from Naugatuck, she currently works at a retail store in the Bethel-Danbury retail area around Walmart. She told a news outlet she has short hair for a good cause. Aimee Toms donates her locks to a charity organization that makes wigs for cancer patients. She recently did it for the third time.

Do you think the North Carolina law, has caused a fear of transgender people? Aimee Toms acquired a new perspective following her unpleasant experience and said: I cannot fathom the discrimination transgender people must face in a lifetime,” “Can you imagine going out every day and having people tell you you should not be who you are or that people will not accept you as who you are?”