Hervis Rogers is the very last person in line to vote at Texas Southern University. His perseverance has stunned people all over. His story will not only impress you but it will surely inspire you.

According to reports, it took him nearly seven hours to cast his ballot on Tuesday. Hervis Rogers was the very last person to vote in Harris County. He waited in line at Texas Southern University for six hours and 20 minutes. Hervis voted at 1:20 a.m. on Wednesday.

Despite what is known as Voter Suppression efforts in Texas, Hervis Rogers a Texas resident waited nearly seven hours to cast his vote so that his voice could be heard.
He told reporters with a smile after the long wait “I wanted to get my vote in to voice my opinion,” “I wasn’t going to let anything stop me, so I waited it out.” 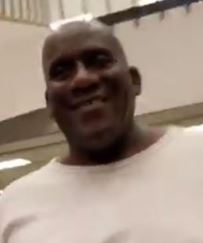 And right he was, Hervis Rogers wasn’t stopped after his willingness was put to the test; at the presence of a high turnout and a lack of voting machines -which seems to have cause the extreme delays hundreds of voters experienced when trying to vote at Texas Southern University.

So who is the man who despite the wait and frustration, was still smiling by the end and had no complaints?
Hervis Rogers who according to online records was born in 1958, and who used the time to watch Super Tuesday results on his phone -also revealed he was going straight to work. He told reporters that instead of going home as any other mortal would, he was going to his night shift for which he was late already! Because that’s the kind of person he is. He said ‘I’m going to work, I should be there already’ The 61-year-old Texan works doing painting.

When asked who he voted for, he didn’t say however, he said that he was sure he made “the right choice.”