Matt Gaetz, the Florida born politician who is known for serving as representative of Florida, appears to be single and unwed.

Matt, widely recognized for following into the footsteps of his politician father Don Gaets -a longtime Florida Republican lawmaker; currently serves as the U.S. representative for Florida’s 1st congressional district.

Matthew Louis Gaetz II-was born May 7, 1982 in Hollywood, Florida and at 37-years-old he doesn’t seem to preoccupied with the subject of marriage. Instead, the only women in his life appear to be his mom, Victoria and younger sister, Erin Gaetz -who is a Republican operative who worked on former Florida Governor Jeb Bush’s 2016 presidential campaign.
Their mother has been in a wheelchair following Erin’s birth. 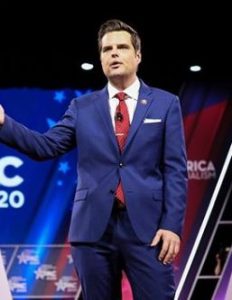 Matt graduated from Florida State University in Tallahassee, Florida, with a bachelor’s degree in interdisciplinary sciences. After finishing his undergraduate studies, Matt moved to Williamsburg, Virginia, to attend William & Mary Law School, where he received his Juris Doctorate.
Prior to making his way to congress, worked as an attorney in Northwest Florida with the Keefe, Anchors & Gordon law firm.
Matt Gaetz has represented Florida’s 1st district since 2017. He previously served in Florida’s House of Representatives between 2010 and 2016.

As previously stated, Matt Gaetz appears to be currently not seeing anyone however, that hasn’t always been the case. He apparently enjoys dating younger women, last year reports surfaced that he dated a 21-year-old woman who went onto become a Democrat congressional intern. At the time of the report, Gaetz famously said, I’m not a monk,’ I’m just a congressman’

Gaetz was worried about the identity of the woman being revealed saying ‘Identifying puts them at risk.

Fast forward to current times, Matt Gaetz is said to be currently in quarantine after being exposed to someone who tested positive for coronavirus. In the case he did have a girlfriend, she might want to isolate herself.