The Virginia Gun Rally taking place in Virginia was organized by the gun rights group -Virginia Citizens Defense League at the request of angered gun owners and activists.

Today -which coincided with Martin Luther King Day, is also known as Lobby Day in Virginia’s capital -an annual event, when Virginians typically use the day off work to lobby their lawmakers. The event is usually attended by a few hundred gun activists and lawmakers who speak in support of the Second Amendment.
But several gun-control bills passed in January by the Democrat-led Virginia legislature – in a state where gun rights have historically been permissive -has obviously angered gun owners and activists.

Democrats, who won majorities in the state House of Delegates and Senate last November, have backed legislation that would limit the purchase of handguns to once a month, universal background checks on gun purchases and allowing local municipalities to ban weapons in public buildings, parks and other areas.

Gun-rights proponents have turned out in numbers around the Capitol to press their case and protest the proposed gun control legislation by the Democratic governor and legislature that they contend would violate their Second Amendment rights.

Various groups including armed militia, right-wing extremists and local Antifa, or anti-fascist movement, have been spotted attending.
A state of emergency has been declared given the contentious nature of the issue as the prospect of such a large event has raised tensions. 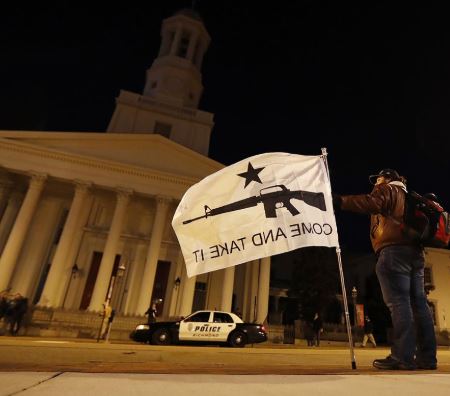 According to BBC, dozens of people from different militia groups gathered on Sunday night rural community hall about 20 miles south of Richmond -to talk about tactics for the Virginia Gun Rally and about the broader threat to gun rights they see in Virginia.

The Virginia Citizens Defense League, insisted the rally is a ‘peaceful event about gun rights’ however they also recognized it has great potential for something to go wrong.
The league has advocated for what are called “Second Amendment sanctuary” resolutions in over 130 counties and municipalities around the commonwealth. Though such measures carry no legal weight, they are still a defiant gesture against tighter legislation.