Maria Lee is the lovely wife of businessman and politician, Bill Lee -who serves as the current governor of Tennessee.

Maria’s husband who has been criticized for not doing enough since the beginning of the COVID-19 pandemic, has issued a state wide ‘safer at home’ order, urging people to stay home as well as ordering the closure of businesses that cannot safely operate.

Born as William Byron Lee on October 9, 1959; the Tennessean attended Auburn University, where he studied Mechanical Engineering. Following his graduation, he joined the family business, becoming the president of Lee Company in 1992. He served as the construction company’s president and CEO since 1992 until 2016.
He was first elected governor of Tennessee in 2018. He assumed office on January 14, 2019.

Bill Lee has had by his side wife, Maria Lee, the two have been married for over a decade. 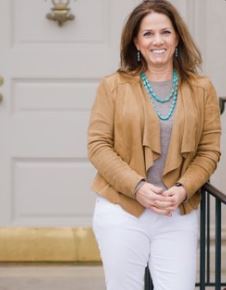 Maria Lee is actually his second wife, Bill was first married to Carol Ann Lee from 1984 until her death in 2000. The couple had four children together; Jessica, twin sons Jacob and Caleb, and Sarah Kate. Carol Ann Lee died following a horseback riding accident.

Bill and second wife Maria Lee were married in October 2008. They met after Maria Lee served as the third-grade teacher for Caleb. She also served as coach for Bill’s daughter Jessica in cross-country and track. She left her profession as a teacher shortly before marrying Bill Lee.

Maria Lee grew up in Maryland in a middle-class neighborhood and an Italian family. Her parents brought foster infants into their home as part of a pre-adoption program. Following in those steps, she began volunteering as a youth ministry leader in her teens. She then attended University of Maryland, College Park.
She and her husband have participated in mission trips around the world, including building houses in Mexico and working in an orphanage in Haiti.
Maria who lives on a farm in the Williamson County community of Fernvale, is also active in Grace Chapel Church and in numerous faith-based ministries.

Maria Lee was her husband’s number one supporter when he decided to run. She has been involved in several critical decisions. Last year, First Lady Maria Lee launched Tennessee Serves, a three-part initiative designed to engage Tennesseans in serving one another and their communities.